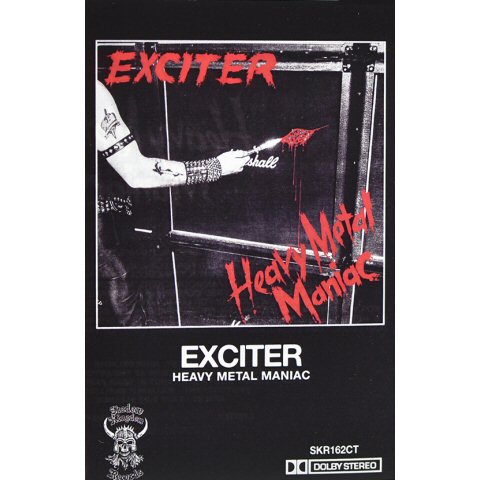 Speed Metal trio Exciters classic first album. Founded in Ottawa, Ontario in 1978 where they took the name from a Judas Priest track. Their first two track demo ‘World War III in 80 got the attention from Shrapnel records. The title track of the first demo ended up on the 1982 compilation album ‘US Metal Vol. II’. A second demo was released in March 1983 under the name ‘Under Attack’ Shrapnel then released this classic debut albump ‘Heavy Metal Maniac’ by simply pressing up the existing demo tracks onto vinyl. However, the relationship ended with Shrapnel when Varney apparently took umbrage with some of Exciters darker lyrical content. ‘Heavy Metal Maniac’ had pushed the band into the spotlight enough to easily secure a new label deal and land a valuable support to Black Sabbath, performing in front of a sell out 7,000 crowd at the Ottawa Civic Centre Arena on October 22nd 1983. Heavy Metal Maniac is packed with a hard-edged ferocity and love for speed that pushes it well beyond the bounds of “classic” heavy metal and into the realms of the then-nascent speed metal movement. Its rough production values and nearly out-of-control distortion added a crucial punk attitude and provided the “push over the cliff,” as it were, that characterized most of thrash’s original stars (Metallica, Exodus, Slayer). That being said, time has proven that Heavy Metal Maniac is a much more one-dimensional affair than, say, Kill ‘Em All, but this wasn’t nearly as obvious in the heady days of thrash metal’s infancy, and songs like “Cry of the Banshee,” “Stand Up and Fight,” and the excellent title track are all mini-classics in their own right.