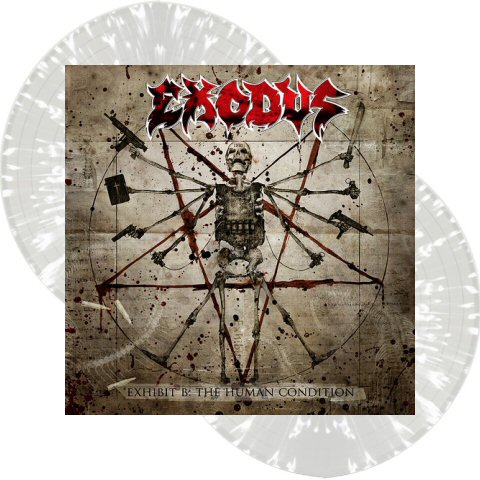 You can always count on Exodus to supply some good, old-fashioned, downright vicious thrash metal with each release. And the lads deliver once more on their 2010 offering, Exhibit B: The Human Condition (impressively, their fourth album over a six-year period — 2004-2010). As with the past few Exodus releases, guitarist Gary Holt and drummer Tom Hunting are the sole original members left in attendance. But this certainly doesn’t prevent the group from offering up an absolutely brutal slab of thrash metal — with the intensity not dipping one iota from beginning to end. And according to Holt, Exhibit B is a bit of a concept album, as the lyrics deal with such warm and fuzzy topics as “cruelty, ignorance, inhumanity, and brutality.” Either way, the heavy duty topics certainly fit in well with the fast and furious riffing and vocal roars (the latter courtesy of Rob Dukes) — as evidenced on such headbanging ragers as the album opener, “The Ballad of Leonard and Charles,” as well as “Class Dismissed (A Hate Primer)” and “March of the Sycophants.” Even with the tunes that momentarily take a breather (“Democide,” “A Perpetual State of Indifference,” etc.), it’s only a matter of time until Exodus rams down the gas pedal once again and returns to their chug-a-lug riffery. Exodus has always liked it fast and furious, and they certainly don’t disappoint with Exhibit B: The Human Condition. ‘It’s really, really sick. It’s really different from the last one and it’s really different from the two before. But it’s 100 percent Exodus. Out of the last three, this one is faster, but it’s also a little more melodic, and it’s also a little bit more old school. Some of Rob’s vocal patterns are just so old school; it’s killer. The production is a little more, let’s say, less sterile. Not less sterile, but less digital perfection, more organic. It’s really, really lively. There is by far more melody on it as well. Thematically, it’s a little different. The last one centered a lot on religion and this one is, as the title says, about the human condition; cruelty, ignorance, and inhumanity and brutality. Just the things that man has shown to be so adept at doing’. – Gary Holt, Exodus

Track list:
1. The Ballad Of Leonard And Charles
2. Beyond The Pale
3. Hammer And Life
4. Class Dismissed (A Hate Primer)
5. Downfall
6. March Of The Sycophants
7. Nanking
8. Burn, Hollywood, Burn
9. Democide
10. The Sun Is My Destroyer
11. A Perpetual State Of Indifference
12. Good Riddance
13. Devil’s Teeth