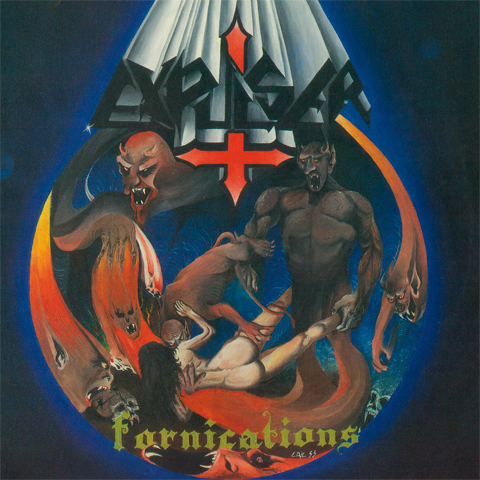 Expulser is one of those old school thrash metal bands from Brazil that got signed to Cogumelo Records in the 80s. The band came together in the small city of Lavras in the state of Minas Gerais, Brazil, the band was influential by the countries scene at the time. They managed to churn out no less than four demos and two full-length albums as well as a compilation album in 2017 but never really became as well known as Holocausto, Dorsal Atlantica, Mutilator, Sepultura or Sarcofago. The Fornications 12” EP features the three tracks that originally was released on the 1990 split EP with Brutal Distortion on Maggot Records from France. The total runtime of the EP is just over 12 minutes and although a little on the shorter side, this is an EP that fans of the old school death/thrash from this part of the world should lap up quickly. Fans of Sarcofago and early Sepultura will relate to this EP. The opening track Vomiting In Paradise is the longest track on the album, just shy of six minutes. This track made its appearance on the band’s first demo although that version lasted just under two minutes. The second brutal song called The Offensor is just under the four-minute mark and makes its first appearance on the Bloody Cross Of J.Christ demo that appeared in 1990. The earlier version is a seven-minute long track which has now been trimmed to a respectable three and a half minute long song on the re-release.

Track list:
1. Vomiting In Paradise
2. The Offensor
3. No Ressurection