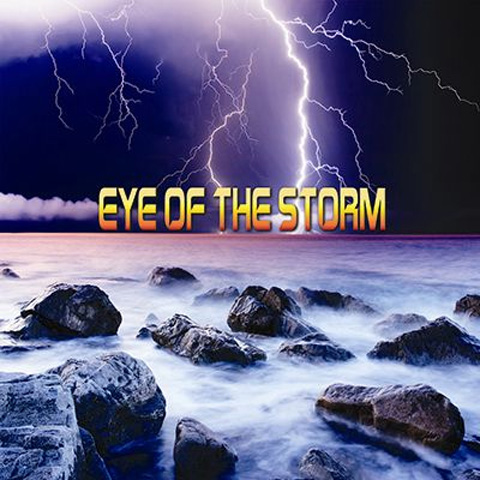 Eye Of The Storm -S/t cd

The time was the summer of 1995. Chris Rifkin was an artistically frustrated guitarist yet again stuck in a dead end band situation. Influenced by Rush, the Bay area thrash scene, newer metal like Prong and Fear Factory,and also artists such as Pink Floyd, Marillion, Kitaro, and other new age atmospheric electronic acts, he felt trapped as it seemed yet again he saw his visions and ideas get watered down and in a situation where his ideas were basically castrated and neutered. On his own, he writes 2 quick song ideas which showcased his influences that he couldn’t otherwise write. Just to see how they would sound, Chris took them over to Jeff Kimpland, former bandmate from his old band Saharra, who had a small demo studio in his basement. A few weekends later, the song Searching, which is featured and recorded during these sessions as a bonus track, came to life. Showcasing Chris Rifkin’s knack for writing extremely melodic, catchy hooks and melodies,it is also the first time he got to show off his new heavier drop tuned guitar licks,and introduced his ambient new age electronic influences. It also features one of his finest guitar solos, a soaring spacey, tasty, and futuristic melodic trip in sonics. The other song would become the instrumental Itopia, another new age aggressive metal styled song. Fast forward to the early spring of 1996, Chris Rifkin finally decides to bail on the dead end situation, deciding that he wanted to do a project where he had full control of songwriting and style, without having to compromise ideas that in band situations can sometimes ruin. Thus, the birth of Eye Of The Storm. At first, he was going to try his hand at vocals, but after hearing himself back, thought better of it and decided to ask Jeff Kimpland to do the vocals. The rest is history. A groundbreaking album in the metal world, the Self-Titled Eye Of The Storm album would set the course in what Chris Rifkin would do later with his F5 project, and would also firmly establish Jeff Kimpland as one of the finest rock vocalists on the scene. After 15 years, this album is finally getting an official reissue exposing Eye Of The Storm to a wider audience than ever before, while also giving people who have been seeking this long out of print album a chance to find it. By including the bonus track Searching, people now have the chance to also grab a very rare unreleased track that some people actually think is the best song Eye Of The Storm recorded. As for the future, don’t be surprised in the very near future if you hear that Chris Rifkin and Jeff Kimpland are working on a very anticipated follow up.