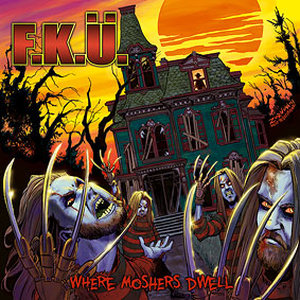 The moshing beast we know as F.K.U., short for Freddy Kruegers Underwear, first raised its ugly head back in 1987. In those days they were more or less pure S.O.D. die hard disciples, to say the least, and after a handful of something that was supposed to be rehearsals but more bore the resemblance of cheap beer and pizza fights, the band fell into a hiatus. It wasn’t until confronted with a strange guy called Larry in early 1997 that the band considered bringing the slumbering beast back to life again. The debut demo Beware Of The Evil Underwear received overwhelming response in 1998 and so did their thrashing opus Metal Moshing Mad (1999) and Sometimes They Come Back… To Mosh (2005). In 2009, Larry (throughout the years member of: Darkane, Andromeda, Scarve), Pete (Lost Souls), Pat (Midas Touch, Lost Souls)and Ted (Flagellation, Wuthering Heights) realized that what the world really needed was another dose of their patented Horror Metal Mosh, and so began the making of their third moshing masterpiece Where Moshers Dwell. Once again inspired by ’80s thrash and horror movies and of course, old issues of Metal Forces and cheap beer, this is the release that’s going to set a new standard for horror and metal for decades to come. This is for thrash metal fans that like their music in the vein of old Exodus, Overkill, Nuclear Assault and D.R.I. with specific sense of humor. The album features exclusive narration by Robert Englund himself (Freddy Krueger character) and growl vocals courtesy of Jorgen Sandstrom (Krux, Vicious Art, ex-Entombed, ex-Grave). F.K.U. is a proof that its still possible to have good, friendly, violent fun and makes you crave to get to the nearest mosh pit. Lets unite and mosh as one