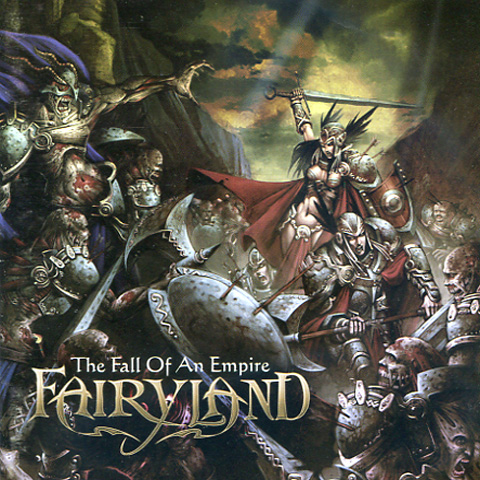 Fairyland -The Fall Of An Empire cd

Official licensed made Irond Music records release in jewelcase made for the Baltic States, Ukraine, Belarus and Russian countries

Fairyland is back with their sophomore effort, The Fall Of An Empire and it is nothing, if not sensational! This is a solid effort of pure symphonic power metal. Like their first release, The Fall of an Empire still has the catchy mediaeval melodies, lovely choirs and orchestral sounding backing. Deduct the wailing cow and add a female singer that can sing and you have perhaps the best Symphonic Power Metal these ears have heard in five or six years, when the magnificent, A Time never Comes by Secret Sphere, was released in 2001, followed by the equally superlative, Hastings 1066, by Thy Majestie in 2002. Track one, Endgame, is an instrumental introduction, something common for this genre. Tracks four, Slaves Forlorn, and eight To the Havenrod, are instrumental suites or interludes if you prefer. Sandwiched between the first two instrumental are two typical but well done Hard driving power metal songs, The Fall of an Empire and Lost in the Dark Lands. Awakening is a nice varied tempo power metal number with strong keyboard work followed by a beautiful softer song, not quite a ballad, also with excellent piano playing, Clanner of the Light is a high production, fast tempo, driving song, followed by the aforementioned suite, To the Havenrod. Track nine, The Walls of Laemnil is also a fast moving metal song. An excellent medium speed number, Anmorkenta, follows it. In Duna is one of only two true ballads, the other being track thirteen, Look into Lost Years. Both are pleasant folk sounding song sung by a female vocalist. The Story Remains at over ten minutes is the longest and therefore the most complex, variable paced, epic song, with great keyboards and guitars. The last and bonus track is another melodic hard driving power metal piece, Across the Endless Sea.