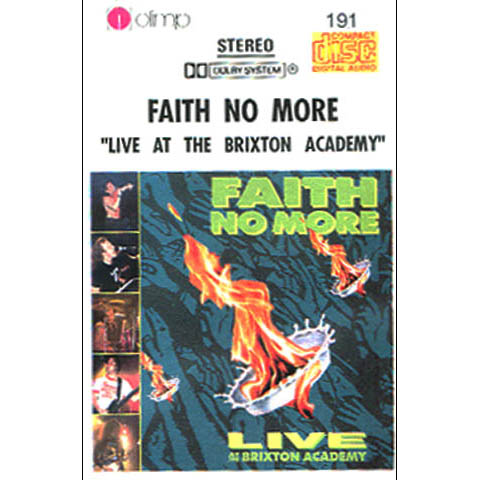 Poland is probably the country that had the most record labels in the world that only released cassettes. But even though there were lots of labels the market was still small as they only printed these for their own market inside of Poland. And a label in one town maybe lacked the distribution for another town and so on. A Warzaw or Krakow label might print more copies of a tape then labels from a smaller town. So even if there are thousands of releases you will notice how rare some are if you start to try to list the catalog number of one particular label. Some cassettes just rarely shows up. Most Polish cassette labels disappeared in May of 1994 when Polish Parliament passed on a new copyright law. Olimbo was a small label based in Polands fifth-largests city Poznan. Olimbo only released approx 250 tapes up to 1994.

Recorded during Faith No More’s 1990 tour of England in support of their breakthrough album The Real Thing, this live release is an obvious cash in, basically replicating the recordings used for the band’s first video release, You Fat Bastards. There’s nothing necessarily wrong with it, mind you, but strange song sequencing and it’s over-dependence on songs from the aforementioned record render it pointless except for fanatics interested in the two studio tracks, ‘The Grade’ and ‘The Cowboy Song’. As for the live material, the band shines on Black Sabbath’s ‘War Pigs’ and their own The Real Thing. It is also amusing to hear singer Mike Patton ad lib lines from Technotronic’s Pump Up The Jam at the end of their hit Epic. This Polish tape misses The Grade