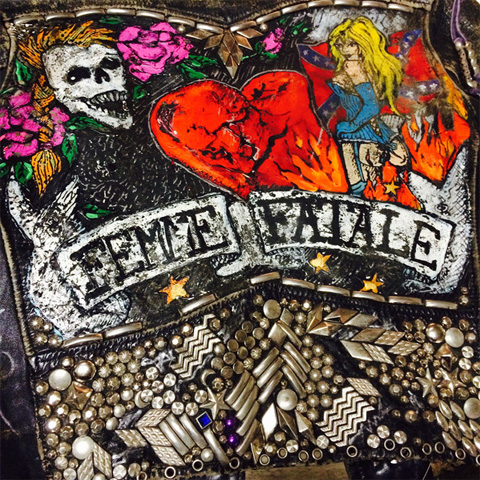 Femme Fatale –One More For The Road cd

In 1988 Hair Band Femme Fatale made some big noise on radio and MTV with 2 very popular songs and videos – Waiting For The Big One and Fallin In And Out Of Love from their first release on MCA Records. MCA was ready for a second release from the band and had them writing with outside writers and rehearsing once they got back from the tour. “Yeah, it was all really exciting to think we were going to get back in the studio since we had really cut our teeth out on the road” says Lorraine Lewis – singer and songwriter for the band. “I was having writing sessions with some really great L.A. songwriters like Wes Arkeen (considered the 6th member of Guns & Roses who co-wrote “It’s So Easy” with Duff McKagen) and Jack Conrad (Heart, John Waite). There were big plans for this baby band and an industry buzz had been established primarily from Femme Fatale’s popular videos and their live shows. When we thought we had written a good number of songs we liked, we booked some time at a rehearsal studio in the valley to record our demos for the label, says Lewis. The boys had been working hard on arrangements and I remember the recording day like it was yesterday. The band was setting up equipment at the studio and I was cruising around L.A. on the back of Rikki Rockett’s Harley. He dropped me off at the studio and the boys and I got down to business. We ran down all of our new songs one after the other like we were doing a live show on Sunset blvd, but without the crowd interaction. If anyone made a mistake we just kept going. At the end of it, Femme Fatale had recorded the demos for their anticipated second album. We were all pretty stoked at how things came out. Toby did a great job with recording us and I believe we captured the gritty live feel that we had come off the road with. We transferred it onto a cassette tape and now all we had to do was take it to MCA and get our asses back into the studio for our second record. By the time Femme Fatale got in to meet with MCA, most of the people that had signed them were gone. The label head was now Bret Hartman and he had his own ideas about what bands MCA would get behind and Femme Fatale was not one of them. Lewis recalls, Yeah we played him the demos and they weren’t really his thing. He was really into Pretty Boy Floyd at the time and our brand of rock and roll was coming from a heavier – more angry place then before. We were already feeling disenchanted with MCA since they pulled our tour support for a second run and now we didn’t have anybody rooting for us at the label. It sucked. Bret suggested the band get back into the rehearsal room and continue writing. I felt that was a stall tactic”, says Lewis. I just wanted to get on with it and then things got really crazy for the band. Guns n Roses producer Mike Clink had heard one of the songs on the demo called Buried Alive and was interested in producing not the band but Lewis as a solo artist. MCA released them from their contract. We were stunned says Lewis, but I saw it coming for sure. Now they wanted to keep me as a solo artist and have me claim the debt that Femme Fatale had incurred from the first record. The rest of the story is full of twists and turns, highs and lows, failures and successes but the most important aspect of the story here is that I held onto those recordings! I transferred them from the cassette tape to a cd and I have been carrying them around for over 25 years in between 2 pieces of paper inside a copy of To Kill A Mockingbird. Now this long time lost gem is finally seeing the light of day. These recordings are raw, rough, and have a live feel to them but they have been mastered in its best way possible and they are recordings made over a quarter of a century ago with the original members of Femme Fatale. Sit back and enjoy the ride