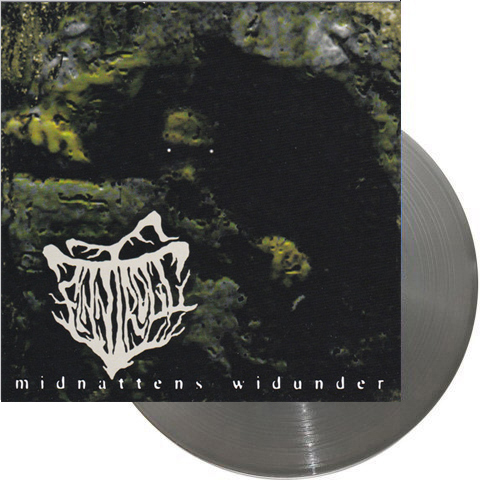 Finntroll started something new with their debut album Midnattens Widunder. How could you possibly go wrong with polka, metal and growling vocals? The answer is you can’t. In their press release from the record label it was stated that Finntroll do ‘trollish metal no one else’. I wonder if Shamaatae of Arkanum has been contacted about this — he might be pissed. Finntroll and Arckanum might both be interested in Trolls but they sure don’t sound alike. Both are very fine bands but Midnattens Widunder offers songs that are of medium speed with a very heavy rhythm guitar and keyboards / lead guitars creating some crazy elements over the heavy riffage. Throughout a lot of the songs breakdowns insure where the keyboards will take over for the most part to create a more folky / polka sound. The vocals throughout the album seem to follow the general feel of the music (growly at the heavy / distorted parts, clean during the folk / polka / keyboard parts) and the vocalist shows he has the ability to go from throaty growls to booming talking / singing. As a sidenote, the lyrics are in Swedish something that fits the music quite well. The album as a whole is strong, having a variety of songs; two short but speedy songs, two instrumentals, and 5 normal medium paced songs. Interested to check out ‘troll’s crazy style, then definitely pick this up.