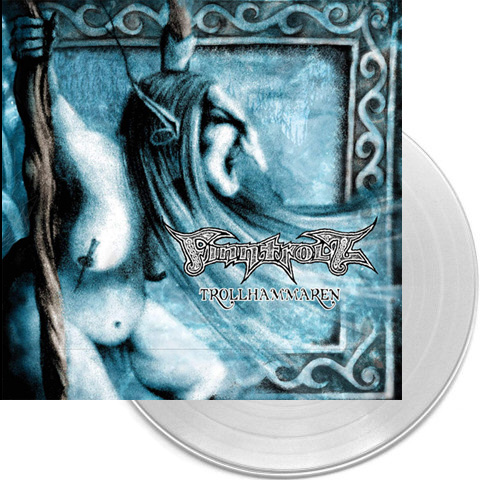 This five track EP from Finntroll serves as another stop-gap between the Jaktens Tid and Nattfodd full-lengths. Packaged neatly in a digipack containing some of the best cover art from the band to date, this is best purchased as a completion to the collection of an avid fan. Not to discredit Trollhammaren (the troll hammer) though, as the five tracks are all good. Due to the length of the record and small number of songs, it is pertinent to give this disc a track by track review, if only to highlight the diversity of what this offers. Title track and opener Trollhammaren is a staple from the band, which will probably appear in all their live sets from now till forever. The credentials of the song are questionable; it could be seen as a repetitive cliché of the genre. Despite this it is extremely catchy, and therefore very enjoyable, but it is not the reason you should buy this record. The second track Hemkomst (Home coming) is fast paced, still catchy, and somewhat more substantial than the previous. It is reminiscent of Den Hornkronte Konungen in pace and style. It’s basically a great song and worth a listen. Next up Skog (the forest). Heavy and black with some atmospheric keyboards, this song seems ahead of its time for Finntroll. It would fit nicely on their Ur Jordens Djup album, or even an early Moonsorrow release. It’s an eclectic fusion of black and viking sounds, with the usual sprinkling of trollishness thrown in to the mix. Forsvinn du som lyser (Be gone those who shine) is a metal re-working of an acoustic track from Visor om Slutet. It is hard to do this track justice on paper. It has to be heard to be appreciated but needless to say it epitomises what’s great about Finntroll. This was one of the last songs recorded that was written by Somnium. The album closes with Hel Vete (whole wheat). The title is a pun on the Swedish word helvete meaning hell. This has a choppy almost funky feel to it, but unlike En Maktig Har on Ur Jordens Djup the song does not sound out of place, due to the diversity of this EP. It serves to demonstrate that Finntroll aren’t a one trick pony, and is an awesome track to boot. You probably already have the title track on Nattfodd. Still try and get hold of this record. Yes it’s short, but its more than sweet. Remember this is an EP, something for fan but perhaps not a casual listener. Don’t expect any more than fifteen minutes listening time, but this EP hasn’t been marketed as something it isn’t, and it does its job with a flourish