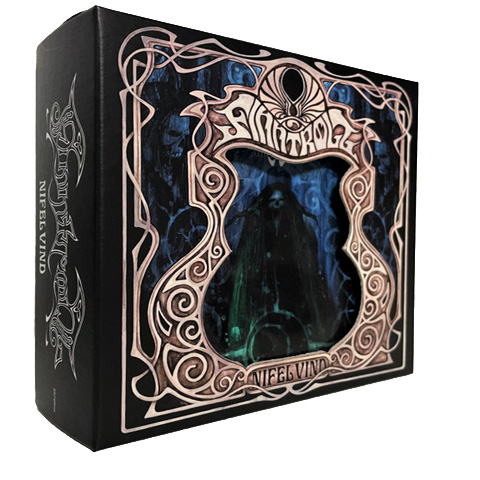 Nifelvind was recorded at Sonic Pump Studios in Helsinki, Finland and mastered by Mika Jussila at Finnvox Studios. The album cover artwork was done again by the band’s own guitarist Skrymer. ‘Nifelvind’ remains true to the Finntroll mythos and ethos: According to Vreth the album ‘is the most advanced and mature Finntroll-album to date, with musical themes ranging from powerful death metal riffs to dark soundtracks, from pounding black metal to groovy 80’s pop-music. All this is accompanied by our trademark sound, lots of never-before-heard instruments in the metal-scene, folklore and legends that make it overall the most versatile album we have created so far’. The lyrics are still written by the founding member Katla in Swedish. Both Katla and Vreth are part of the Swedish-speaking minority in Finland. ‘All cultures have similarities in their myths and folklore. Tales of bitter dead walking again, sagas of good and evil and songs of divine ascension’ states Katla. ‘That in some form probably date back to the beginning of speech and song, are a fascinating lore that maybe defines our humanity but also our feelings of loss concerning our contacts to nature and the bestiality that lies within every human being. This album is a celebration of those myths, some new some ageless. Some true, some complete nonsense. That is the nature of folklore. Under every root and stone lays a story heard but untold’. So follow the Blodmarsch of Nifelvind and buy this album