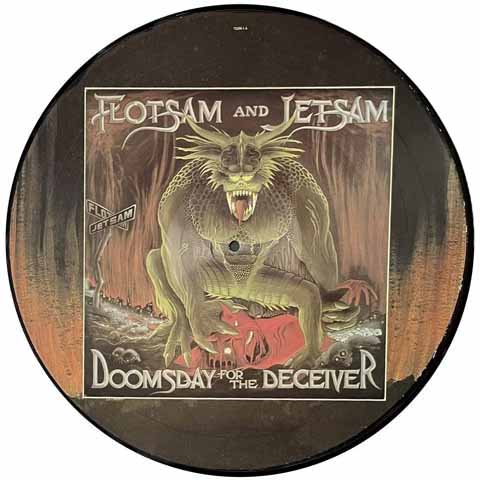 Flotsam And Jetsam ‎–Doomsday For The Deceiver pic disc

Founded in 1981 Flotsam And Jetsam was to rise above the thrash melee with a strong debut album ‘Doomsday For The Deceiver’. In spite of this strong start, unfortunately the band are known in many media circles more for being the source of Metallica’s Jason Newsted and despite major label back up have struggled to rid themselves of that stigma. Nevertheless, Flotsam And Jetsam, signing to MCA Records, would stick to their guns releasing a string of commendable metal albums and put in punishing tour schedules that never betrayed a sniff of compromise. The band’s first album ‘Doomsday For The Deceiver’, produced by Brian Slagel at Music Grinders in Eldorado and Track Recording Studios in Hollywood on a budget of $12,000, was a well received release, chock full of quality aggressive metal. ‘Doomsday For The Deceiver’ saw US release on July 26th 1986. The leading British magazine ‘Kerrang!’ would go so far as to grant the album six points on their five point rating system.