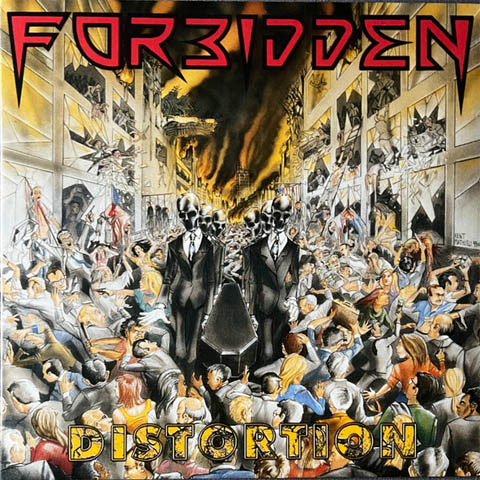 After years of business complications prevented Forbidden from adding to its thrash metal oeuvre, the band finally released its third studio recording of new material, Distortion, in 1995. Many things changed during the five years since the release of Forbidden’s second disc Twisted Into Form; grunge had come and gone, and thrash metal standard bearers Megadeth and Metallica (the latter of which cast considerable influence over Forbidden and many of the band’s Bay Area metal contemporaries) had slowed down their music and developed into commercial powerhouses with singles all over rock radio and MTV. These changes were not lost on the members of Forbidden, and when they finally got around to following up their respected but slightly derivative late-’80s thrash recordings, they paid close attention to the new ’90s metal speed limit. Vocalist Russ Anderson delivers his fiercest and most dynamic performances of distortion, perhaps releasing a little of the pent up tension that the half-decade layoff served to build. New drummer Steve Jacobs does an admirable job of filling the vacancy of thrash virtuoso Paul Bostaph, who had exited the band to join Slayer. Despite the fine contributions of all involved, Forbidden was adrift between its early thrash successes and the ’90s aggro of its final release, Green, and Distortion lacks the band’s usual focus as a result. With crafty twin-guitar work and tight, crunchy production, Forbidden puts in a solid effort on Distortion, but the absence of Bostaph and the evolution of metal away from the Bay Area group’s thrash roots left more creative holes than the band could adequately fill.