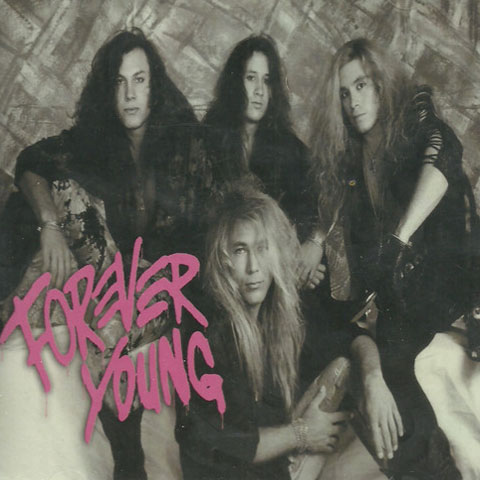 Forever Young was formed in the late 1980’s when longtime friends Hot shot local LA singer Paul Gold and guitar virtuoso Ronny North both of them were tired of their current bands and wanted to strike out on their own. The longtime friends decided to team up and start a new project…A few weeks after forming their new partnership the two had written most of the songs that defined the Forever Young sound. After extensive auditions to find the right rhythm section and going through all the available talent pool in Hollywood they were at a loss. It seemed finding the right fit was harder than expected. The duo knew what they were looking for, Just not who. They had to both be very talented musically and not only look the part, but had to have the right energy, chemistry, and charisma that was needed to round out this band. Finally, during one last search for a suitable bassist and drummer. They found drummer Rick Horwat and bassist Steve Petropol. They had both recently relocated together from Maryland to try their luck at the Hollywood music scene. They came in together and nailed the audition. Ronny and Paul agreed on the spot they found their guys to complete their vision. They started rehearsing immediately and were soon ready to start playing out live. At this point they realized that they needed just the right name for the project. After all four members brain stormed with no name in sight. Paul came up with the Forever Young name. They got together with a professional graphic artist to create a logo. Now the guys were ready to go. Soon after, they were tearing up the Sunset Strip along side all the other Hollywood heavyweights of the day , better yet, they were holding their own. They quickly built up a dedicated following and even managed to land themselves in the pages of National Geographic Magazine where they were featured with a full-page color picture of the band on stage during one of their headlining shows at Gazzarrii’s….The band quickly got known for their catchy songs, high energy, and beautiful female background singers. Forever Young was one of the top drawing acts on the infamous Sunset Strip. They played up and down the Sunset Blvd. When you saw Forever Young, You could always count on fact that they would put on a great show with Hollywood style and attitude every time they played. Then some 25 years later, got together again and recorded a new song. This song has been included exclusively on this album and the band are pelased to present their first official release of their songs.

Track list:
1. Never Say Goodnight
2. Tonight
3. Can’t Get You Out Of My Mind
4. Little Darlin
5. Inside And Outside