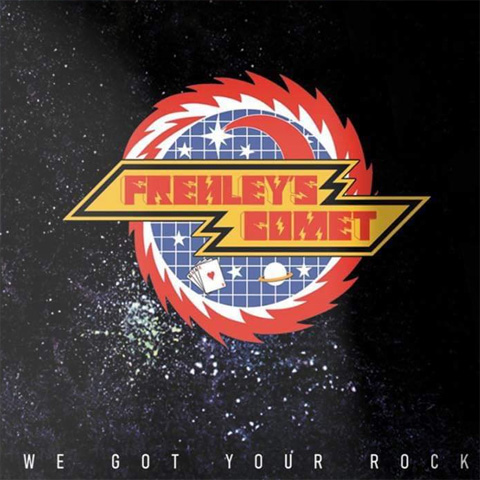 Frehleys Comet -We Got Your Rock lp

Black vinyl with a 4-page booklet

Ace Frehley left Kiss in 1982, for a while it seemed he moved back to Jendell but in November of 1985 he re-emerged again, showcasing his new band Frehleys Comet. Expectations for a record deal was high as is solo outing in 1978 proved to be the most successful of the Kiss solo albums. But times had changed and Kiss, and their former members, were seen as has-beenand mo major record company was interested to sign the Spaceman. The original Frehley’s Comet line-up consisted of Ace Frehley (on lead, backup vocals and lead guitar), Richie Scarlet (on lead, backup vocals, lead and rhythm guitar), John Regan (on bass guitar and backup vocals), Arthur Stead (on keyboards), and Anton Fig (on drums). Fig also played drums on Frehley’s 1978 Kiss solo album, as well as Kiss’s Dynasty and Unmasked albums. The original Frehley’s Comet line-up recorded several demos and also performed them live during their East Coast club tour in March of 1985. However only a few of them made it to the final recording of Frehley’s Comet debut album in 1987. After the tour the band finally signed a deal with the UK label Bronze records. The album was suppose to feature tracks from the demos as well some material that Ace had co-written with Gene Simmons. The title of the album was We Got Your Rock. The title track was written by Marty Kupersmith and was offered to Joan Jett & The Blackhearts, who rejected the track because she thought it sounded too much like I Love Rock And Roll. The track then landed in Sin, Steeler and Jag Wire bassist Rik Fox hands who recorded it for their coming debut album. Frehley‘s manager heard Sin’s version over the phone and freaked out because that version was MUCH heavier than Ace‘s and they hurried to get the Frehley version out before Sin could. Ace’s manager admitted that Sin’s version blew his away. However the We Got Your Rock album was never released because everything came to a halt when Bronze’s financial problems became to big, the label folded in 1986, and the album never got released and the original Frehleys Comet crashed with Scarlett and Sabino leaving the band. Thanks to Eddie Trunk and Megaforce Records they finally got Ace back in the spotlight again when they released a new version of Frehleys Comet. This album however shows you what could have been if Bronze and the original Frehleys Comet hadnt fallen apart.