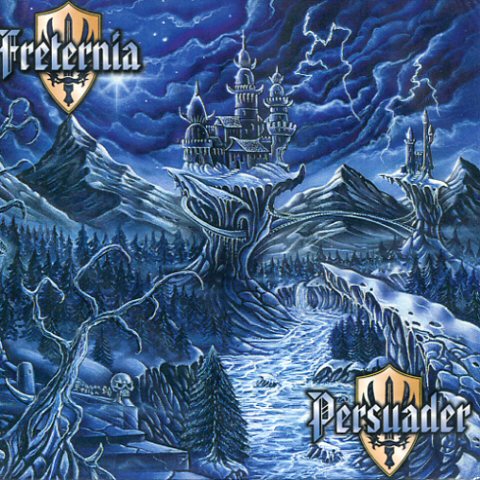 This out of print split cd includes 4 tracks each of Freternia and Persuader. 2 studio tracks from their first albums and two rare demo tracks.

Freternia:
The story of Boras based power speed metal act Freternia started under the name Earthcrawl during the late 90’s but soon changed their name. Their first demo ‘The Blood Of Mortals’ was recorded in October of 98 but was never released. Their second demo ‘Somewhere In Nowhere’ from April 99 was however sent to labels all over Europe. And within just a few days they recieved a call from the swedish label Loud N’ Proud records. A deal was made but original singer Tomas felt that someone else should take over the lead vocals. And with Ironwares Pasi Humppi behind the microphone the band were ready to record their debut ‘Warchants & Fairytales’. The album released in July of 2000 shows a young up and coming band with excellent ideas and a great singer. Freternia utilizes a similair combination of heavy, fast melodies, powerful choral elements, and fantasy lyrics as Blind Guardian but with musical influences leaning more towards bands like Helloween and Gamma Ray.

Persuader:
Umea based act that debuted in 1997. The first Persuader tracks that could be find on a cd was the ‘Swedish Metal Triumphators’ cd released in 2000. The label that released the split cd, Loud N Proud, folded before the release of their first album ‘The Hunter’. Jens Karlsson and lead guitarist Emil Norberg would later team up with Blind Guardian drummer Thomen Stauch and Iron Savior guitarist and vocalist Piet Sielck to form Savage Circus.