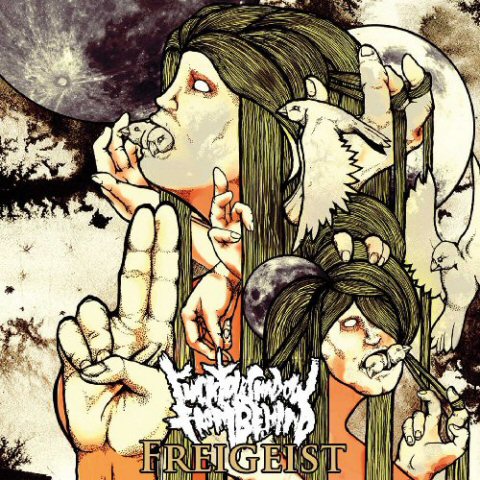 Fuck Your Shadow From Behind ‎–Freigeist cd

It would be easy for me to state that this oddly named act are a German equivalent to Darkest Hour, with their sweaters-and-glasses take on metalcore/melodic death metal, even down to the artwork, but I know you deserve a little more. Okay, I lied. Even with a few artistic (read: jazzy/acoustic) injections, Fuck Your Shadow From Behind are a pretty darn competent Germanic take on Darkest Hour, and much like some of their countrymates (Neaera, Heaven Shall Burn, Deadsoil, Six Reasons to Kill, Fear My Thoughts, etc) there is a distinct, stern Teutonic flavour and production to the material that manages to cull from the US scene, but still sounds inherently German (apart from all the titles and lyrics being in German). As mentioned before, above and beyond the hack n slash riffage and occasional burly rumble, there are a few “experimental” tangents here and there, but they seem a bit haphazard. From something as short as the ballad-ish number “Wandel Und Replik” to sudden jazz/acoustic flourishes (“Das Erlöschen Der Qual (Pt. I),” Tristesse,” “Ein Tagwerk” and my personal favourite and first single, “Zwielicht”), these moments at least break up the standard but well-done cantering, melodic metalcore of “Der Wahrheit Zweites Gesicht,” “Das Es War Die Zeit,” “Verse Der Freiheit,” “Die Abkehr” and “Auf Weise.” And to the band’s credit they don’t overindulge or feel the need to inject clean vocals or full-on interludes and such, keeping the quasi-experimentation within the tracks. Even with the album glossed in a typically German workmanlike professionalism and attention to detail, there isn’t too awfully much that stands out, especially as the album gets past the halfway point in “Zwielicht” where the band creatively peaks, but it’s all well done and full of conviction and character and worth your time if you are a fan of the genre and its cloned US efforts.