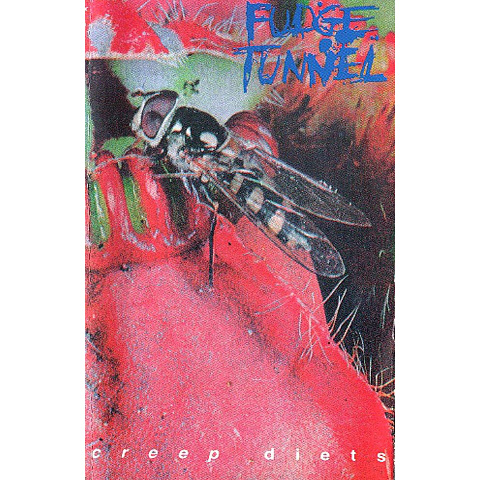 Getting a full major-label deal didn’t affect Fudge Tunnel any in terms of what they did — Newport still handled production and so forth — but whichever Sony executive figured they had a radio hit on their hands was probably on some expensive crack. The tight, stop-start riffs and screamed, shouted vocals probably meant visions of Helmet’s success danced in the accountant’s heads, but MTV didn’t come calling. Regardless, for those already taken by the trio’s blunt, brute way around metal, Creep Diets maybe had a calmer moment or two in comparison to Hate Songs, but otherwise cranked up the volume and sought to take no prisoners. Opening track “Grey” gave a hint as to proceedings — while most of the time it alternated between bass/drums/vocals verses and a crisp full band punch on the chorus, any accusations of Nirvana wannabe status were shredded by the massive go-to-hell solo pasted right in the middle. From there, the trio makes its way, and while things do sound great throughout, songwise there’s not much variety — hasn’t hurt a lot of bands, perhaps, but in the end most listeners would want some sort of break. As a result, when Fudge Tunnel does try something different, it stands out — the key song being “Don’t Have Time for You.” Smack dab in the middle of the album, it’s a lazier lope of a song that still fits into the Fudge Tunnel approach (semi-buried vocals, upfront bass) that works despite not immediately beating in skulls, even with the fried ending. Jazzy drum fills on “Ten Percent” and the apparently Smashing Pumpkins-quoting “Face Down” give other hints of testing bounds. There’s a definite sense of humor at play in any event — why else name a particularly messy number “Tipper Gore”?