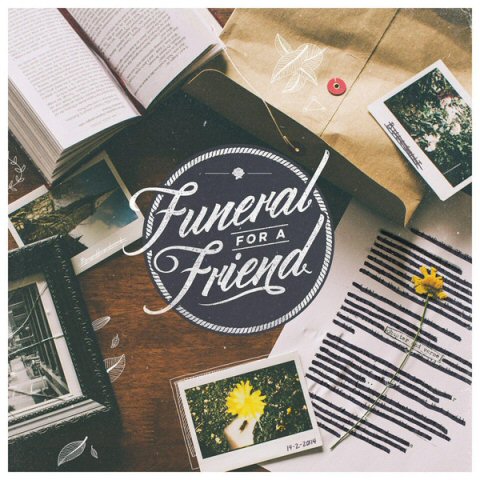 Funeral For A Friend ‎–Chapter And Verse cd

Long-running Welsh post-hardcore/emo band Funeral For A Friend grew out of their screamo roots into more varied expressions of post-hardcore heaviness over their long run, moving away from their angsty beginnings around the time of their fourth album, 2008’s Memory And Humanity. In the years that followed, the quartet would go through a series of line-up changes and shifts in style, all the while moving away from their ties with major labels and embracing a more independent approach to releasing music and touring. Seventh album Chapter And Verse continues the drastic stylistic diversity the band began exploring on 2013’s Conduit. Over a decade removed from the more softhearted and melodic Midwestern emo tones and screamo tropes of their earliest days, Chapter And Verse finds the band delving into burning riff rock on tunes like “Pencil Pusher” and spirited midtempo emo-pop on “1%.” Having been immersed in the changing tides of independent hardcore and emo since 2001, the band makes nods to its seasoned pedigree with the song title “The Jade Tree Years Were My Best,” referencing Delaware record label Jade Tree, which reigned supreme in emo circles during the late ’90s. The lyrical content of the song itself doesn’t seem to have much to do with the glory days of all-ages Promise Ring shows, but it’s a smart and self-aware barb, reflective of the mindset of a band whose members have been through a lot over the years and are now very comfortable making whatever type of music they please, regardless of the expectations of any outside forces.

Track list:
1. Stand By Me For The Millionth Time
2. You’ve Got A Bad Case Of The Religions
3. Pencil Pusher
4. You Should Be Ashamed Of Yourself
5. 1%
6. After All These Years…Like A Light Bulb Going Off In My Head
7. Modern Excuse Of A Man
8. Inequality
9. Brother
10. Donny
11. The Jade Tree Years Were My Best