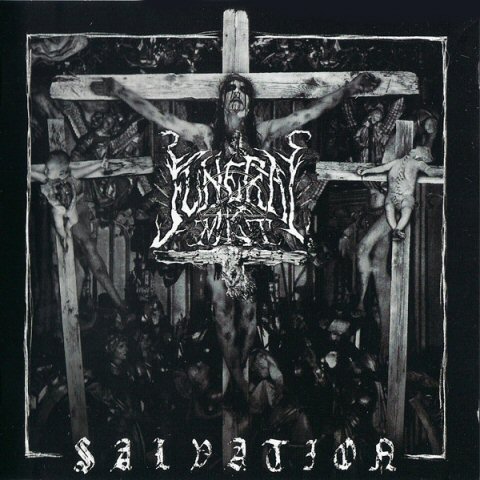 This is Funeral Mist’s first full-length album, comprising of 10 songs and clocking in at no less than one hour and seven minutes. At first glance, one might dismiss this album as above-standard norsecore, as it it hard to distinguish much in the maelstrom of chaos. However, once one gets past the not-so-squeaky clean production, one can see that this is a true masterpiece. The riffing in this album is razor-sharp and played at breakneck speed, yet still manage to evoke feelings of majestic evil and hate in a way that no other black metal band to this day has managed to accurately reproduce, thank Satan for that. The drumming provided by Necromorbus is manic in its intensity and calculated in its variety; the (at times ridiculously fast) double bass rumble rarely ever leaves a moment of respite to the listener. As excellent as the guitarwork and drumming by Nachash and Necromorbus respectively may be, it is Arioch’s vocals that shine through in this album; the man’s voice is different from your typical black metal shrieking. He uses a powerful, commanding, almost spoken technique that occasionally still sends shivers down my spine, as well as a fairly wide range of shrieking, moaning and some methods that should not even be possible for a human to produce (see 4:31 of Across the Qliphoth for an example). The lyrics deal almost exclusively with orthodox devil worship and blasphemy, and are written either in English or Latin. Scattered throughout the whole album are various sound samples, such as church bells tolling, orchestras playing or choirs singing, which adds to the twisted, disturbing atmosphere that this album inevitably creates. Yes, this album is disturbing. These songs have a feel to them that no other black metal band has ever been able to recreate fully, one of complete and utter evil. These are true psalms of worship to Lucifer; an accurate way to describe them would be to say that they are the exact reversal of the church hymns. For this reason I am fairly certain that this band is the first real orthodox black metal band in existence, and still the best. It is my strongest conviction that Funeral Mist have raised the bar impossibly high with ‘Salvation’. In short: if you are a black metal fan, this album is an absolute essential, no ifs, ands or buts. If you don’t like it, chances are you shouldn’t be listening to this genre in the first place.