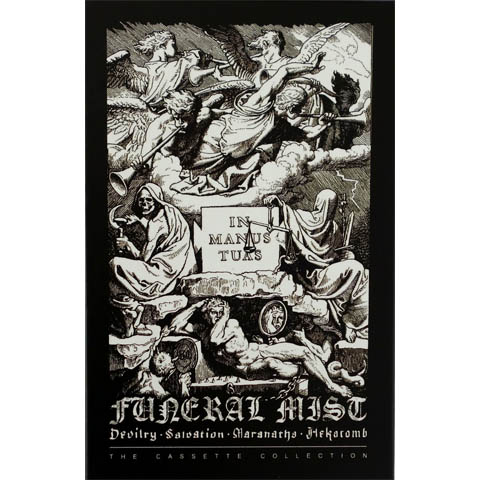 A beautiful 4 cassette box featuring the albums Devilry, Salvation, Maranatha and Hekatomb as well as a 20 page booklet and 4 graphic art cards.

Devilry 1998
In many respects this EP is like a mini-me Salvation. The riffs and drumming have the same feeling, the production is also vicious as fuck, the many samples are there, the overall progression follows the same idea and it even starts (noise and screaming) and ends (sample of classical music) the same way. So, this just has to rule, right? It sure does! If anything, this sounds even more vicious than Salvation. Necromorbus drum assault is more pronounced in the mix. Arioch’s vocals sound very very demonic. In short, if you liked Salvation, you’ll like this.

Salvation 2003
This is Funeral Mist’s first full-length album, comprising of 10 songs and clocking in at no less than one hour and seven minutes. At first glance, one might dismiss this album as above-standard norsecore, as it it hard to distinguish much in the maelstrom of chaos. However, once one gets past the not-so-squeaky clean production, one can see that this is a true masterpiece. The riffing in this album is razor-sharp and played at breakneck speed, yet still manage to evoke feelings of majestic evil and hate in a way that no other black metal band to this day has managed to accurately reproduce, thank Satan for that. The drumming provided by Necromorbus is manic in its intensity and calculated in its variety; the (at times ridiculously fast) double bass rumble rarely ever leaves a moment of respite to the listener. As excellent as the guitarwork and drumming by Nachash and Necromorbus respectively may be, it is Arioch’s vocals that shine through in this album; the man’s voice is different from your typical black metal shrieking. He uses a powerful, commanding, almost spoken technique that occasionally still sends shivers down my spine, as well as a fairly wide range of shrieking, moaning and some methods that should not even be possible for a human to produce (see 4:31 of Across the Qliphoth for an example). The lyrics deal almost exclusively with orthodox devil worship and blasphemy, and are written either in English or Latin. Scattered throughout the whole album are various sound samples, such as church bells tolling, orchestras playing or choirs singing, which adds to the twisted, disturbing atmosphere that this album inevitably creates. Yes, this album is disturbing. These songs have a feel to them that no other black metal band has ever been able to recreate fully, one of complete and utter evil. These are true psalms of worship to Lucifer; an accurate way to describe them would be to say that they are the exact reversal of the church hymns. For this reason I am fairly certain that this band is the first real orthodox black metal band in existence, and still the best. It is my strongest conviction that Funeral Mist have raised the bar impossibly high with ‘Salvation’. In short: if you are a black metal fan, this album is an absolute essential, no ifs, ands or buts. If you don’t like it, chances are you shouldn’t be listening to this genre in the first place.

Maranatha 2009
Funeral Mist manifests rarely but when it does, then it is in exceptional glory. While the taint of the pandemonium that was ‘Salvation’ is to never disappear, for it undeniably set new standards within Black Metal and beyond in terms of musical violence, chaos and the channeling of ominous spiritual energies, ‘Maranatha’ materializes like the unadulterated omen of the end of times, like a glowing pitch black pit to whose appeal to jump within nothing can resist. The violence and the musically bizarre are still there, displayed with a rare mastery but a thorough work on atmospheres and structures and the addition of complex layers of ill sounds make this second full length album by Funeral Mist a renewed challenging experience, as perilous for your mind’s sanity as it is for your soul’s deliverance. Unique, unmistakable for anything else, Funeral Mist stands with splendor as the epitome of extremism. It is only way beyond one’s limits that an encounter with the dimension summoned by ‘Maranatha’ is made possible, an encounter as perilous as this work is cruel. ‘Maranatha’ is an Aramaic phrase occurring only once in the New Testament and also in the Didache which is part of the Apostolic Fathers collection. It is transliterated into Greek letters rather than translated, and is found at the end of Paul’s First Epistle to the Corinthians (1 Cor 16:22) as a farewell. ‘If any man love not the Lord Jesus Christ, let him be Anathema Maranatha.’ The word ‘Maranatha’ translates to “O Lord, come!”, however if separated into ‘Maran atha’, it becomes a credal declaration of “Our Lord has come.”

Hekatomb 2018
Nine long years and infamous black metal act Funeral Mist return with eight uncompromising tracks of satanic brutality. 2003’s hellfire hit Maranatha was the last time we heard from Funeral Mist with sole member Arioch (Daniel Rostén) deeply involved with main project Marduk under his Mortuus moniker. Hekatomb has come much like Marduk’s Viktoria did – with little warning attached. Hekatomb follows closely in Maranatha‘s diabolically destructive path only with an evidently higher production value and some interesting twists coiling about its unfettered serpentine riffage. Purists of the excellent debut Salvation will also be able to crack a corpse-painted smirk in knowing Hekatomb is still very much Funeral Mist through and through. It’s still about as Christless and goddamn evil as albums get. Funeral Mist play balls-out-don’t-fuck-around black metal with a dense body of percussion and lightning fast guitar work, ravaging and unrestrained, atonal in their randomness, unrelenting in their fury. Mortuus/Airoch vocal work is more terrifying than ever, convulsing from brutal throaty rasps to uninhibited screaming abandon. Hekatomb is no strings darkness. It’s pure satanic black metal played with bleeding fingers and utter virulence and that’s exactly how it should be played. This album is vicious and wicked and will probably be the black metal album of the year