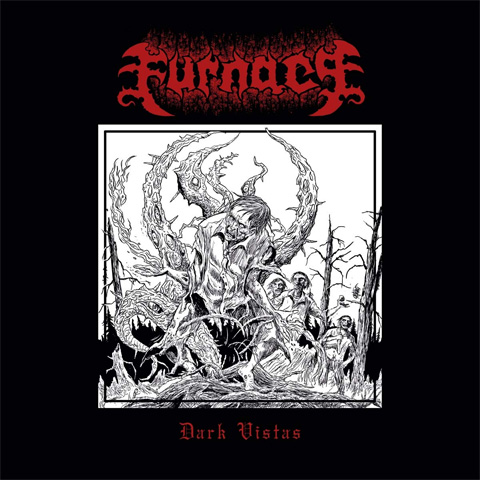 Death metal machine Rogga Johansson have on Furnace teamed up with Peter Svensson (from Cult Of The Fox and Void Moin) and drummer Lars Demoke to write some material together. The two (Rogga and Peter) had started talking about death metal and found out that they both had a mutual love for horror fantasy concept albums. Inspired by the Cthulu Mythos by H.P. Lovecraft, Mr Svensson started working on the concept and lyrics. By the time he was finished he had created what could have been half a book so the actual idea evolved into a bigger project and after Rogga had created the music to the material the two got into the trouble trying to fit the bits and pieces together to create and album. When all was set and done it had lead up to not just one album but two; Black Stone Church and Dark Vistas. Peters writing of a dark and eerie world is the perfect place for Rogga to go ahead and create a soundtrack to. The material here is based on mid tempo riffs and the music is leaning more on the vocals and guitar harmonies rather than tempo and big lead. Fans of cinematic death metal need to check out Furnace