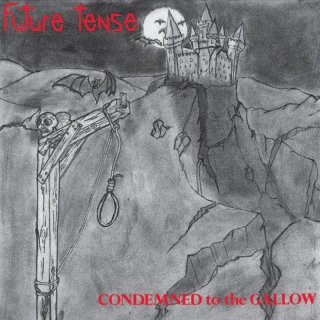 Dutch heavy metal act Future Tense dates back as far as the end of 70s. The members Michiel van Loef on guitars, Tjerk Kiesel on bass, Rico Hoek on drums and Peter Ockhuyzen on vocals called themselves New Spring Band but when they found out that the initials became NSB (Dutch Nazi section in WWII) the band decided that they had to change name. Guitarist Michiel came up with Future Tense and after that and a change of a drummer the band started to play live around the small countryside where they had grown up. They rehearsed in a farm and released their first demo simply called Future Tense during this period. More line-up changes occurred and it was when guitarist Rob Weber and vocalist Cock Van Drunen joined that the band found their heavy metal sound. Their second demo, a 6-track cassette called Protect Your Ears, was released in 1982 and a few months later the third demo, Battle Of Metal, appeared. It was this demo that were heavily promoted all over the world. Jan Scheffer in America who were promoted another Dutch band, Together, helped out a lot and even managed to get Brian Slagers, Metal Blade founder, attention. The track Nightmare ended up on the Metal Massacre volume 5 album making Future Tense and Hellhammer the first two European bands that appeared on a Metal Blade release. Future Tense found a new guitarist called Reinier Schenk who joined the band and made the guitar sound heavier than ever. The band also signed a record deal and recorded and released the mini album Condemned To The Gallow in 1984. The EP was recorded in two days at a mobile studio. The tracks were great but the band never was that pleased with the sound quality. To promote the album the band did some frantic live shows with two burning crosses on the stage (the two Ts in their logo). However when the bad reviews of the Metal Massacre compilation track and the Condemned To The Gallow MLP started to come in many lost interest in the band. Many reviews were extra critical on Cock’s voice and the band started to get problems to get gigs and their motivations went down by the months that followed and the band finally split up in the early 1985. The band would re-unite in 2003. This glorious double album features the mini album together with the Battle Of Metal 1983, Protect Your Ears 1982 demos and the private pressed Swords Of Vengeance 2003 EP as bonus