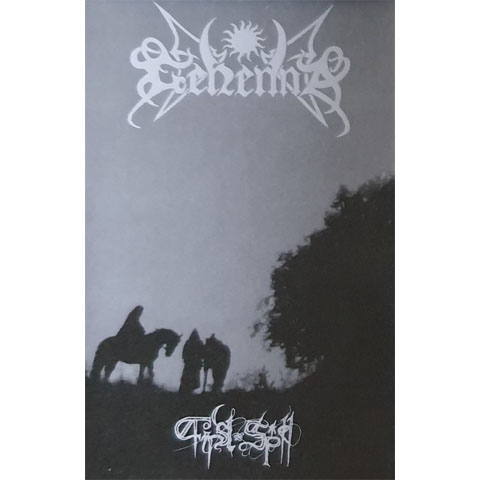 During the pinnacle of black metal there were a bunch of black metal bands emerging suddenly out from nowhere, all bearing similar imagery, idealism, and aesthetics. In most cases, particularly in Norway, the bands had either broken loose from their past death metal efforts, or were just forming from scratch, creating or attempting to create this relatively new style of music, for very similar reasons. Most if not all of the earliest bands writing this style are very well known today, because of the fact that they basically reconstructed the 80’s first wave into an entire new form of black metal. However, some of the bands that came a few years later were just too late for the initial explosion, but not too late to be considered third wave rip-offs. Stavanger band Gehenna are one of those bands. They debuted with the 1993 demo ‘Black Seared Heart’. The debut album ‘First Spell’ released in 1994 is rather unique, and not very similar to other, faster, harsher bands such as Immortal or Darkthrone. What we have here is a slower, more melodic, and often times gloomier version of Norwegian black metal. The atmosphere within is often times slightly eerie, with a low end, grim black metal rasp and keyboard synth creating said atmosphere. Guitar and bass lines are equally additional to the music, the guitar having a nice, thick tone, not so different from that of Ancient’s earlier years, despite being slightly lower in the mix, and the bass having its presence clear in the music. There is no blasting to be found here, just a simple, steady pace accompanied by a slow double kick. The sound of the music has that unique production used at Grieghallen, with everything being clearer than a 4 track recording, yet not sounding anything remotely close to being over-produced whatsoever. The music here is good for envisioning a dark Norwegian cloudy sky after a solemn rainfall over the land. It sets a relatively gloomy atmosphere, which makes sense considering the album’s cover art. This should be in any black metal collection, since significance is highly relevant to the genre.

Track list:
1. The Shivering Voice Of The Ghost
2. Unearthly Loose Palace
3. Angelwings And Ravenclaws
4. The Conquering Of Hirsir
5. Morningstar