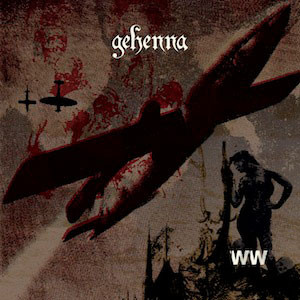 Gehenna is the word for jewish hell or purgatory. We had to wait more than four years for their sixth studio album and gone are the death metal elements in favour of those crepuscular, black metal soundscapes that made Gehenna one of the black metal pioneers back in the early ninties. ‘WW’ brings a chunk of the past into the future. Gehenna used Frost from Satyricon as session drummer for this album and thats a marriage made in hell that wages war itself and its surrounding. The primitive sound of the album forcefully blends in perfect disharmony with the dangerous and caliginous style of the material. The vocals has never sound so good on all great riff that Gehenna gives us over all those years. WW is an album that can only be described as an enormous return to the misanthropic sound of true Norwegian Black Metal. It also sees Gehenna embracing the genre with far more convincing effect than ever before. For those who miss the aura that seemed to surround the early Scandinavian Black Metal explosion, WW is a fitting homage and an excellent reminder that the ability to create such a mysterious and bleak atmosphere is not yet dead.