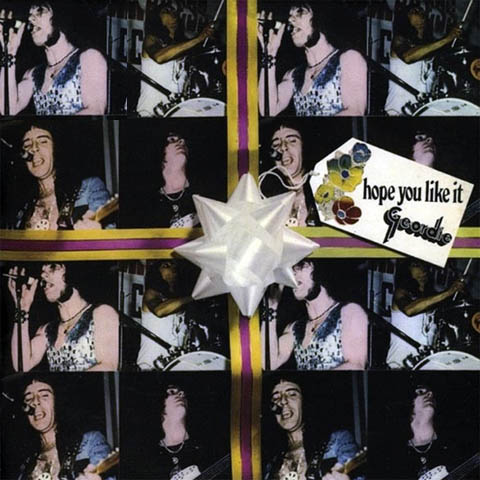 The debut album from Newcastle quartet, Geordie. Featuring the unmistakable vocals of Ac/dc’s Brian Johnson. Often drawing comparisons to Slade and Sweet, Geordie put their own twist on the British glam-rock sound. Highlights here include the foot stomping Geordie’s Lost His Leggie and Keep On Rock In. Also included is the UK Top ten hit All Because Of You. Geordie didn’t break any real ground musically, but that’s not the point…they weren’t trying to. Like their UK counterparts The Move and Slade, Geordie were simply a loud, good-time pub band who wrote catchy and fun songs with a punchy, hard rock edge. If you love Ac/dc then you might not like Brians first band and nod it off as being to glammy. Well if you do however like his voice then you need this because at the time that Geordie were at their peak, Johnson’s voice had the ability to splinter concrete. He never sounded as good with Ac/dc as he did with Geordie. Perhaps the oddest song of the lot is the goofy “Geordie’s Lost His Liggie”, where Johnson sounds as if he’d put away one pint too many and goes into a mock-Cockney/Scottish accent on the vocals. I get a kick out of him breaking up laughing at the end of the song, and then you hear the sound of him lighting up a cigar and blowing out the match; he obviously had a great time with that one. Guitarist Vic Malcolm was a good, unflashly guitarist, and the rhythm section of Tom Hill and Brian Gibson were similarly talented. There’s some excellent, hard rocking pop stuff here, a little of its time, but there’s no denying the fun that the band seem to be having. All in all, this is a good, fun rock album that are really enjoyable but maybe not essential.