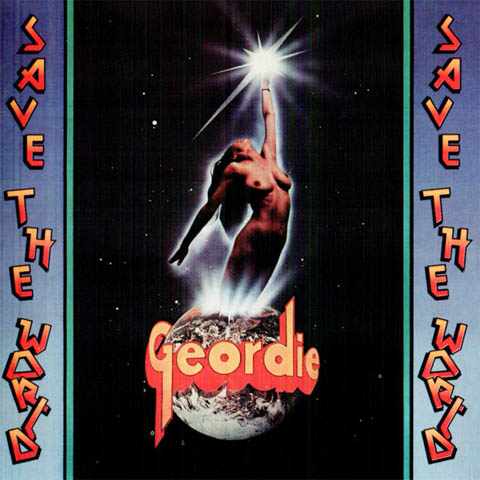 Geordie -Save The World lp/cd

A hard rock band from Newcastle, England, Geordie is mostly known for their lead vocalist, Brian Johnson, who would later join AC/DC. In 1972 and 1973, they had a few hits in the U.K., including the number six single ‘All Because of You’ and ‘Can You Do It’, which reached number 13. Their sound was influenced by British rock bands of the day such as Led Zeppelin, as well as some glam stompers, with Johnson’s distinctively abrasive singing strongly in evidence. The band kept going until 1976, after which Brian Johnson spent a few years doing sessions until joining AC/DC following the death of their previous singer, Bon Scott. This was their third and last album with Johnson on vocals. The band was often called Newcastles answer to Slade and ‘Save The World’ is the most diverse of the three Geordie albums. It’s a sweat-stained offerings ranging from straightforward glam rock, tough hard rock and ass-kicking Judas Priest proto-metal but it also includes mediocre minor-key disco rock, bad horn-laden Chuck Berry r’n’r, embarrassing boogie rock, horrific toaster reggae. The majority of the songs just end up sounding like happy midtempo faceless la-de-da pop rock. ‘You do this to me, you do that to me, everything you da da da’. ‘Momma’s Gonna Take You Home’ has a wonderful wiggly riff and pleasing lilt in its step, ‘Ride On Baby’” has terrific energy and Brian’s voice goes way the hell up there in a balloon, ‘Fire Queen’ is the meanest butt-kicker in the entire Geordie catalogue. Three of these tracks, the mentioned ‘Ride On Baby’ together with ‘Goodbye Love’ and ‘Shes A Teaser’ were all released as singles. As I said it’s a diverse album but Ac/dc fans and some 70s glam fans will find parts to love.