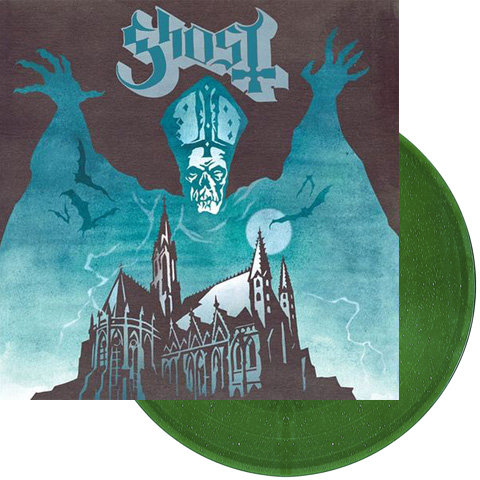 Opus Eponymous is the outstanding debut album from this Swedish occult act. Ghost is the name of a devil worshipping ministry, that in order to spread their unholy gospels and, furthermore, trick mankind into believing that the end is ultimately a good thing, have decided to use the ever so popular rock music medium as a way to achieve their ends. Standing motionless and anonymous beneath the painted faces, hoods and robes which their sect demand, the six nameless ghouls of Ghost deliver litanies of sexually pulsating heavy rock music and romantic lyrics, that glorify and glamorise the disgusting and sacrilegious, with the simple intention to communicate a message via the most effective device they can find – entertainment. Specific attention will be paid to targeting people (research suggests these are most likely to be adolescents) who have a void in their life, perhaps caused by some form of emotional trauma or upset, that can be filled by the music and philosophies of Ghost. In time, these easily manipulated children will come to share the views and goals of the Ghost sect and can prepare their own plans for the downfall of humanity. This album is very unique and it’s best described as a meld of early Mercyful Fate, Voivod, and ’70s rawk, all adorned with pipe organs, some odd synth/organs here and there, and the occasional guitar drone; however, upon my first listen, what really struck me, and not in an entirely good way, was the crisp, clear vocal delivery. Ghost’s clean, clear vocals really caught me off guard, and I wasn’t sure if this was going to be up my alley. At times the vocals teeter on the verge of King Diamond (ala Mercyful Fate), but not as shrill; at other times, the vocals are reminiscent of Snake of Voivod (ala Nothingface). After a few listens, I was really digging the vocals, as well as the album, as a whole. Lyrically, the subjects deal exclusively with evil, worshiping and praising Satan. Again, very different, subject-wise for vocals delivered in such a clear and open manner, but it’s all very well done. Musically, the songs blend great rock riffs, delivered on guitars/amps/effects more reminiscent of ’70s rock than metal, incredibly groovy bass tones, and as I had previously mentioned, some very cool, and very appropriate organ/synth work. It’s an unusual blend, for sure. If you like Mercyful Fate, you may very well enjoy this as well. If you like Voivod, and are willing to swap the sci-fi themes with those of hammer horror and praises sung to Satan, then you will probably enjoy this.