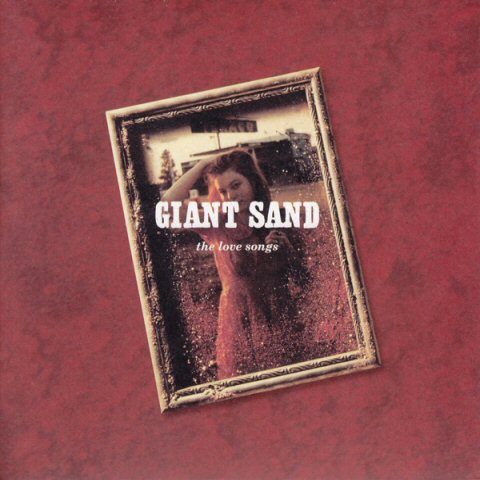 2010 reissue in digipak with 6 bonus tracks

On 1988’s The Love Songs, Howe Gelb and his ever evolving Giant Sand had all but perfected his trademark brand of exciting, unpredictable, shambolic, fractured roots rock. The band was comprised of Gelb on guitars, piano, organ, and vocals; then-wife Paula Jean Brown on bass; Chris Cacavas (fresh out of Green on Red) on organ, piano, acoustic guitar, and backing vocals; and John Convertino on drums. The strident rigidity of Valley of Rain and the uneven if compelling and ambitious qualities of subsequent albums Ballad of a Thin Line Man and Ramp were fully realized here. “Wearing the Robes of Bible Black” extrapolates on the earlier country-rock GS sound, but is more skeletal and apocalyptic; it’s hyperkinetic and zig-zags through its careening, off-rail honky tonk/rockabilly rhythm that’s underscored by Gelb’s spitting vocal. “One Man’s Woman/No Man’s Land” is the first time Gelb completely indulged his love of Northern soul on record — albeit in a rock & roll context. The bassline is straight out of “Heatwave”; the backing vocals in the verses are pure Motown as well. Convertino’s drums double time and Cacavas’ organ colors the backdrop. It’s in Gelb’s shaky voice and his screaming guitar playing that he lets his freak flag fly, before bringing it all down to testify in spoken word gospel fashion. “Mountain of Love” marries Elmore James’ infamous slide blues riff to country boogie and staccato rock pyrotechnics before a lilting country melody is introduced. The skittering garage band approach to Bob Dylan’s mid-’60s recordings and ’70s funk are wed jaggedly but but inextricably together on “Love Like a Train.” The cover of Jerry Leiber and Mike Stoller’s “Is That All There Is?” is an even more jaded-sounding take on Brechtian cabaret than Peggy Lee’s version (though admittedly nowhere near as well sung). The jittery improv jazz interlude on accordion, organ, and snare adds a surreal touch. The fuzz-drenched reverb on the cover of “Get Ready” turns the song’s intentional camp factor into a nasty-ass rock & roll performance. Cut for cut, The Love Songs is among the most consistent and best recordings in GS’ formidable catalog. Its relatively stripped-down sound allows for the quirky gift in Gelb’s songwriting to shine through the primordial rock & roll instinct in the music.