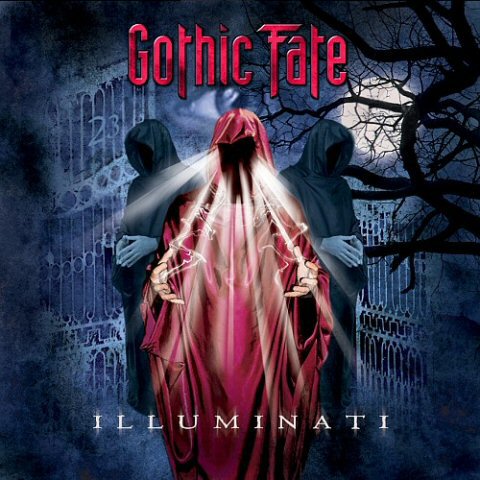 2015 re-release of the 2005 album with new artwork and different track listing.

Sometimes good albums receive the attention they deserve and sometimes they pass by, hardly unnoticed even beyond the mainstream fans. Thankfully some labels out there do a very good job with sniffing out hidden and forgotten gemstones and bringing them to the masses. Polish Skol Records is one of these labels and the latest diamond they unearthed is German Gothic Fate’s (featuring ex-Gamma Ray bass player Uwe Wessel) second album Illuminati, originally released independently in 2005. Hailing from Hamburg, the quintet played power metal (a combination that has yielded tremendous results in the past) and given the quality contained on this album, it is a mystery and shame that they did not manage to attract wider attention and ended up disbanding the same year. While it doesn’t bring anything new to the table, Illuminati has its strengths in the mature song writing that shows that the guys were no greenhorns and have been around the block a few times. Without even a hint of an intro, Enemy is a dynamic, mid-paced opener that is a welcome difference from the usually double-bass drenched scorchers power metal bands place right at the beginning to get people moving. Not so here, second spot Lies takes care of that and while deeply entrenched in the German sound, Gothic Fate do not have the big and super catchy choruses, while staying immediately accessible nevertheless. One big factor here is Darius Schuler’s strong, high voice that manages to elevate the songs to the next level all on its own. The three-piece Illuminati trilogy undoubtedly is the centrepiece of the album and underlines the band’s ability to take traditional, German power metal and successfully cross it with some traditional heavy metal to arrive at a mature and non-happy version of the genre, forsaking any gimmicks, but instead convincing through quality, an approach that more bands should try at least every now and then. And with songs like Desperate Measures, Nightmare or the double-bass scorcher Angel of Sin (easily the album’s best song) it makes Gothic Fate’s fate even more mysterious, since pretty much everything a label could look for in a quality power metal album was right there at their fingertips. Be it as it may, even ten years after the original release, Illuminati still can compete with a good part of today’s power metal scene, congratulations to Skol Records to find this in the depth of oblivion, because this deserves to be discovered by power metal fans worldwide!