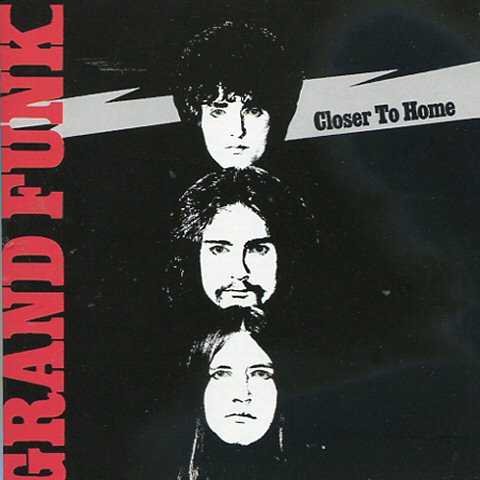 Closer To Home, the trio’s third album, was the record that really broke them through to the commercially successful level of metal masters such as Led Zeppelin and Black Sabbath. Rather than rushing headlong into their typical hard, heavy, and overamplified approach, Grand Funk Railroad began expanding their production values. Most evident is the inclusion of strings, the acoustic opening on the disc’s leadoff cut, “Sins a Good Man’s Brother,” as well as the comparatively mellow “Mean Mistreater.” But the boys had far from gone soft. The majority of Closer To Home is filled with the same straight-ahead rock & roll that had composed their previous efforts. The driving tempo of Mel Schacher’s viscous lead basslines on “Aimless Lady” and “Nothing Is the Same” adds a depth when contrasted to the soul-stirring and somewhat anthem-like “Get It Together.” The laid-back and slinky “I Don’t Have to Sing the Blues” also continues the trend of over-the-top decibel-shredding; however, instead of the excess force of other bands, such as MC5, Grand Funk Railroad are able to retain the often-elusive melodic element to their heavy compositions.

Track list:
1. Sins A Good Mans Brother
2. Aimless Lady
3. Nothing Is The Same
4. Mean Mistreater
5. Get It Together
6. I Dont Have To Sing The Blues
7. Hooked On Love
8. Im Your Captain
9. Mean Mistreater-alternate mix
10. In Need-live
11. Heartbreaker-live
12. Mean Mistreater-live