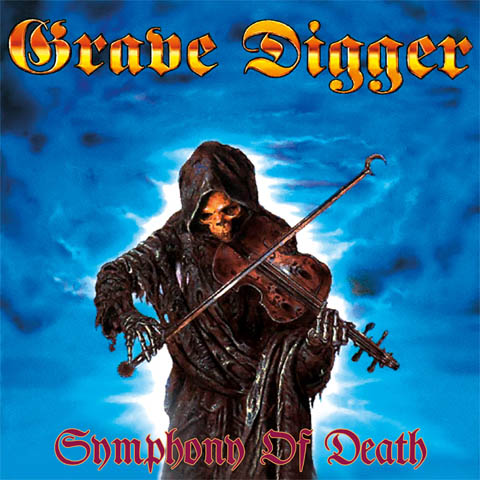 While most fans look to The Reaper as the archetypical return to form release, that wasn’t necessarily the case regarding Grave Digger. While it conclusively swept the infamous Digger debacle under the rug, it actually consisted largely of past material previously composed for the Hawaii demo Bottles And Four Coconuts. The form had already been returned to some years earlier, it just took the band several years to effectively regroup. Through The Reaper, the band exorcised the few demons that remained, and effectively wiped the slate clean to usher in a new, grand period. To Grave Digger’s credit, a bevy of quality material still remained locked in The Reaper’s vault, and they amalgamated the remaining past cuts with the first throes of the modern Grave Digger formula we are familiar with today to bring us Symphony Of Death. As per it’s place in the timeline, this obscure EP bridges the incendiary speed metal architecture of The Reaper with the epic, forward-thinking songwriting present on Heart of Darkness. Grave Digger’s line-up around this period is certainly one to envy, as Michael is far and away the best technician on the kit that they have ever boasted amongst their nefarious ranks. Even without Becker, these guys have no problem shifting between riff-driven fist pounders to darker, more atmospheric romps that came to define the band proper. To bring up the obscure Hawaii demo again, the band pulled out two more of the cuts from that period in Back to the Roots and Shout it Out. Written no later than early 89, Back to the Roots truly lives up to it’s name and can be interpreted as the exact moment that Grave Digger got their shit together. Michael’s cavernous kit and cymbal swells dominate the intro, but what about the riff beneath that? Definitely one of the greatest riffs the band has ever committed to disc, and the song wisely revolves around it for the duration. While Lulis only hinted at his brilliance on Stronger Than Ever, he truly came into his own by this point. Shout it Out is an equally vibrant shot in the arm, exhibiting Boltendahl’s then-newly acquired harpy-like screeching alongside his normal gruff delivery. Then the newer material swings around. The title track has to be a cast off from Heart of Darkness that somehow found a way to go back in time and insert itself snugly into this EP. The approach and delivery is virtually seamless, and how about that chorus? We fight, we kill, we die!. Grave Digger choruses have never been the most deep or introspective, but if you are looking for those attributes in them you are missing the point. The deep, operatic passage near the end of the song instantly separates Symphony of Death from anything Grave Digger had committed to disc up to this point. The winds of change were clearly blowing. Nearly all of the ancillary fat that plagued the pre-reformation albums such as War Games is wisely discarded. No cornball ballads to be found here, Grave Digger instead deem themselves Wild and Dangerous, the namesake of the final and perhaps most balanced track here. Check out the single-note strumming during the verses, which repeatedly defers to an ascending pattern that repeatedly blows the doors off of the entire procession. Then what about World of Fools, which alternates between sullen and vicious? Lulis interjects a number of then-atypical songwriting decisions like subtle acoustic layering, merging into an eclectic whole that screams of Knights of the Cross. I can clearly continue, but Symphony of Death naturally speaks for itself. This very nearly dethrones Heart of Darkness at times, and with nearly thirty minutes worth of material to chew on, it is a wise procurement for any fan of Grave Digger’s ’90s approach. It is also an invaluably critical stepping stone in Grave Digger’s continuing evolution, proving that there is always new ground to cover.