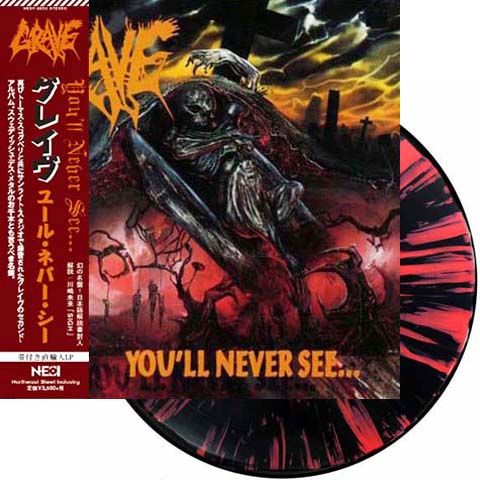 Back when this “death metal” thing was new, and the Swedish scene was just coalescing hot on the heels of Florida’s template-setting example, no one could really tell which of the Scandinavian country’s original big four — Entombed, Dismember, Unleashed, or Grave — would fulfill the promise of its respective seminal debut album and achieve legendary status in the long run. But the release of Grave’s sophomore attempt, 1992’s ho-hum You’ll Never See, pretty much excluded them from contention. Apologies for already giving away the ending of the story, and the ultimate verdict of this review, but even a cursory listen to You’ll Never See is enough to realize that Grave had progressed not one bit from their devastating debut, which still might have been fine and dandy, had the competition not been noticeably outpacing them in every regard. Yes, that unmistakably chunky SDM sound, as produced by the ubiquitous Sunlight Studios, still sounded markedly fresh and served as something of an attraction on its own, but notwithstanding the album’s monstrous, opening title track and a few other undeniably strong cuts (check out “Grief”‘s nifty change-of-pace bridge and the joyfully sacrilegious text of “Christi(ns)anity”), the remaining material simply bled together with disappointing indifference. Grave would rebound momentarily with the following year’s unexpectedly brutal And Here I Die Satisfied EP, but their career would sadly steadily spiral downwards thereafter, as the group attempted to address their creative limitations with an unsuccessful move into a more groove-laden brand of death metal.