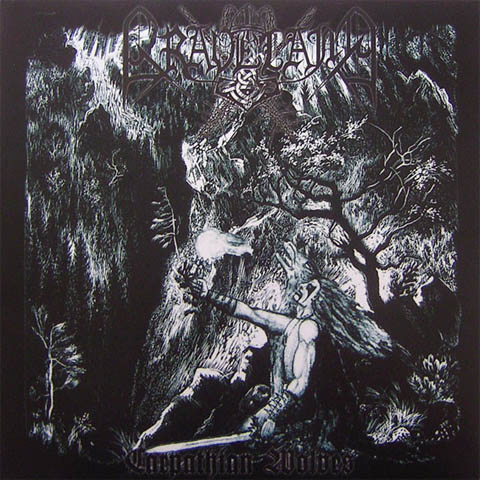 Extreme black metal from Wroclaw, Poland by Robert Rob Darken Fudali. They released six demos between January 92 to 94. Many of theese demos have later been re-released on both cds and vinyl. Gravelands actual commercial debut would be with the 1994 album Carpathian Wolves on the Eternal Devils label. These songs had been laid down at Radio PRO FM Studio in Opole between 26th April and 2nd May 1994 with engineer Andrzej Czubiski. This first album had a blackened atmospheric ascent awaiting at the end of each of the raw and direct riffs, making songs that found beauty hidden within abrasive chaos. Inventively violent riffing is in the simpler punk-influenced style of basic black metal. These darkly honest songs tune in to a vibe of negativity and expand it to a vision of transcending all of the frustration and powerlessness of life. Psychotic vocals describing endless war against the herd carry a rhythm which is nearly inescapable in its insistent presence. Subtle despite its crude origins, this work shaped black metal toward aggression after that aspect had been almost forgotten.