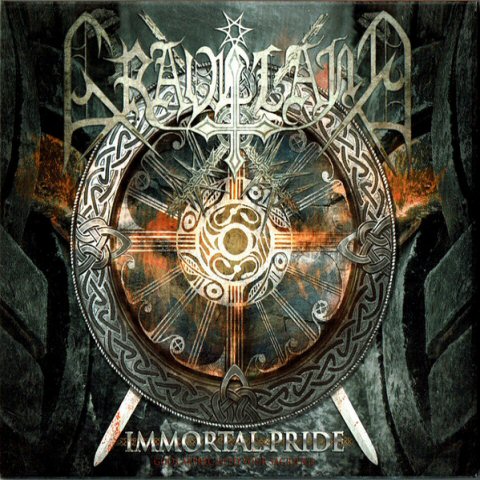 Graveland’s shift in sound didn’t take place posthaste, there was a period where of gradual change. This change begun on Following The Voice Of Blood. The rough, folky ambience of Thousand Swords was still very much there, but was presented in a much more grandiose fashion. The song lengths grew, as did the atmosphere contained within. This was no longer some silly basement black metal band; the melodies Darken created elevated the project to new heights. It was here on Immortal Pride where the music further shifted towards a Hammerheart-esque sound (compete with Darken’s signature croaks). The true genesis of “the new Graveland” wouldn’t take place until Creed of Iron. Where as Following The Voice Of Blood was a very sloppy affair, Immortal Pride is a bit more orderly. Immortal Pride favours steady, monolithic rhythm over breakneck assault which ultimately results in a heavier atmosphere. The guitars retain their cold edge and still have that European tinge, but are much cleaner with less distortion. The bottom end is still lacking here, but the record feels a lot “fuller” than the previous release. Overall what really gives the album it’s depth is the synth work. While Graveland has featured keyboards since the demo days, it was on Immortal Pride that Darken truly realized the types of soundscapes he was capable of (about 10 minutes of this album is dedicated to instrumental synthcraft). No longer are they keys merely a backing element; I’d go as far as to say they’re just as important as the guitars in this instance. Immortal Pride shares elements with early-90’s Bathory, but don’t go in to it expecting Shores in Flames and To Enter Your Mountain. Immortal Pride is it’s own beast, it’s own separate entity that should be treated as such. If the album doesn’t stick with you upon first listen, give it a couple more tries. You’ll begin to appreciate how well the album flows as a cohesive piece.

Track list:
1. Day Of Fury-intro
2. Sons Of Fire And Steel / Outro (Servants Of War)
3. Sacrifice For Honour
4. To Die In Glory-outro