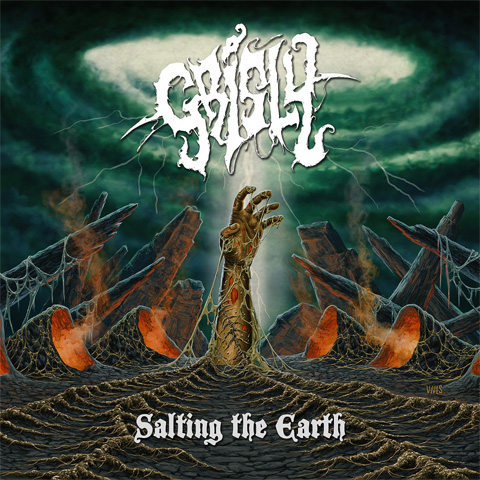 Grisly are the natural continuation of Paganizer after Dennis Blomberg left the band in 2014. Rogga Johansson and Dennis wanted to continue making music together and teamed up with local drummer Henke Lundgren to keep the death metal flame burning. Rather than simply turning to mainstream Swedish death, Grisly are more into a slightly nastier, more depraved sound in terms of groove and melodies. These rather raw influences were borrowed from bands like Autopsy, Asphyx and Benediction, but since this is a representative of Swedish death metal, the melodies typical for it can’t be missing, of course. After Håkan Stuvermark from the legends Wombbath and Nicke Ohlsson from Leprosy joined the band in 2021, they recorded the album Salting The Earth with this new line-up. Compared to its predecessor, the sound dives a bit more into the depths of the Swedish underground. Once again, typical melodies meet the dirty, nasty attitude of the predecessor and mix into a catchy and abysmally heavy neckbreaker, which was produced in Wombbath’s own Nostagica Studio.