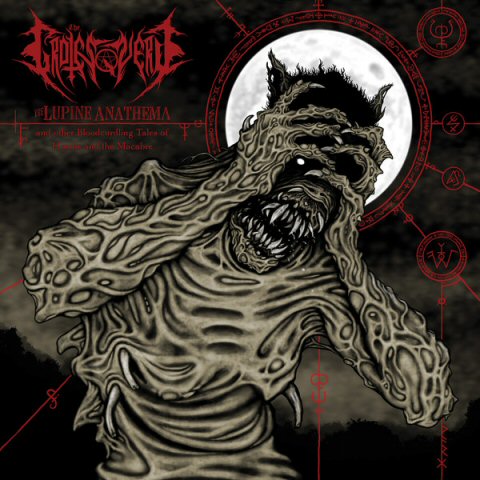 The Grotesquery -The Lupine Anathema cd

I remember purchasing the debut album Tales Of The Coffin Born back in 2010 for two main reasons, namely Kam Lee and Rogga Johansson. I was interested to see how the Floridian and Swedish death metal scenes could be merged and come up with a sound that would be considered as a compromise to both yet still a killer album that would keep fans of both the scenes happy. Well with one listen, my concerns were thrown out the window as it was a quality record full of killer riffs from riff-meister Johansson and stunning vocals from Lee. Their other project at the time, Bone Gnawer, was not too far off this as a reference point but this album was much darker and sinister in content. The Grotesquery’s first three albums were based on a HP Lovecraft trilogy and this time you only need to have a look at the front cover to see what it’s all about. The Grotesquery is more of a concept band that Bone Gnawer was not and I feel it adds to a positive experience for the listener to have this. Who knows, this could be the start of the “Werewolf Chronicles”. Classic death metal like The Grotesquery is designed with a ripping good time in mind, and rip it does – limb from limb. Is it predictable? Yes. Can you still like this? Absolutely. Musicians like Rogga Johansson don’t ply their seemingly inexhaustible verve and ability in a bid to reinvent the wheel, they do so to keep it turning and forging ever on. If you’re a fan of the man’s work – and if not, fucking why not – then you probably already know what The Lupine Anathema sounds like. So stop what you’re doing, turn your eyes to the moon and embrace the call of the wild – the beast demands it.

Track list:
1. Under The Curse Of The Full Moon
2. By Feral Ways
3. Wrath Of The Garvulves (By The Eyes Of Moonlight)
4. The Lupine Anathema – The Advent Of The Werewolf
5. The Faceless God
6. As Death Dies
7. The Beast Of The Bayou (Night Of The Rougarou)
8. Dark Cry Of The Wolf
9. Ithaqua – The Wind Walker
10. Bloodcurdling Tales