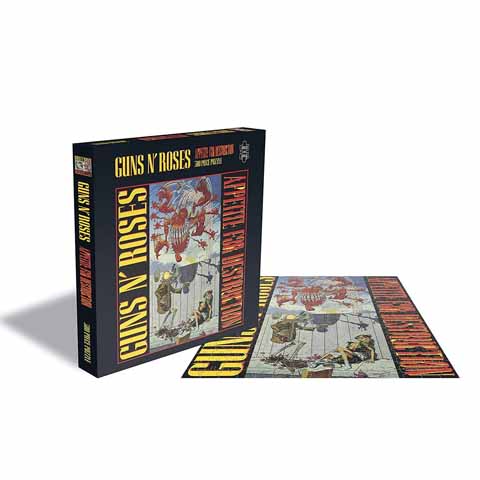 Guns N Roses debut, Appetite For Destruction was a turning point for hard rock in the late ’80s — it was a dirty, dangerous, and mean record in a time when heavy metal meant nothing but a good time. On the surface, Guns N’ Roses may appear to celebrate the same things as their peers — namely, sex, liquor, drugs, and rock & roll — but there is a nasty edge to their songs, since Axl Rose doesn’t see much fun in the urban sprawl of L.A. and its parade of heavy metal thugs, cheap women, booze, and crime. The twin-guitar interplay of Slash and Izzy Stradlin spit out riffs and solos better than any band since the Rolling Stones, and that’s what makes Appetite For Destruction the best metal record of the late ’80s.

The original rape artwork is now available as a 500 piece jigsaw puzzle printed on high quality board.