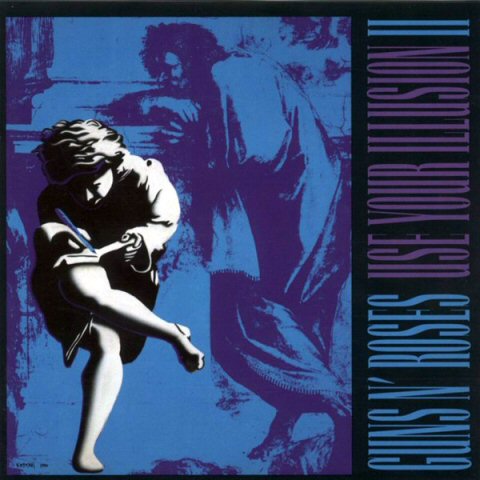 Use Your Illusion II is more serious and ambitious than I, but it’s also considerably more pretentious. Featuring no less than four songs that run over six minutes, II is heavy on epics, whether it’s the charging funk metal of “Locomotive,” the antiwar “Civil War,” or the multipart “Estranged.” As if an attempt to balance the grandiose epics, the record is loaded with an extraordinary amount of filler. “14 Years” may have a lean, Stonesy rhythm, and Duff McKagan’s Johnny Thunders homage, “So Fine,” may be entertaining, but there’s no forgiving the ridiculous “Get in the Ring,” where Axl Rose threatens rock journalists by name because they gave him bad reviews; the misinterpretation of Dylan’s “Knockin’ on Heaven’s Door”; another version of “Don’t Cry”; and the bizarre closer, “My World,” which probably captures Rose’s instability as effectively as the tortured poetry of his epics. That said, there are numerous strengths to Use Your Illusion II; a couple of songs have a nervy energy, and for all their pretensions, the overblown epics are effective, though strangely enough, they reveal notorious homophobe Rose’s aspirations of being a cross between Elton John and Freddie Mercury.