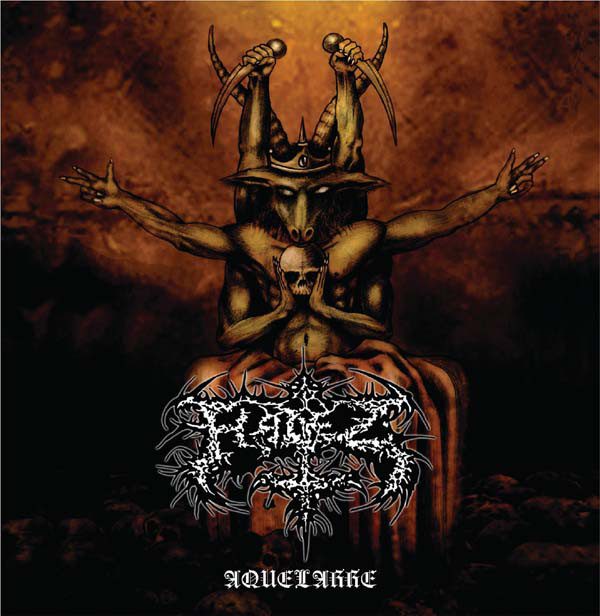 Black metal combo Hadez are legends in their native Peru and their first four demos gained them a true following but it would be their debut album Aquelarre, released in 1993, that definitely broke the doors for the band. This is a classic debut album in the extreme metal genre. Hadez were formed in Lima back in 1986, which means that they were there around the time of the explosion of the Brazilian scene that forged such incredible genre-defining acts as Sarcofago, Vulcano, Holocausto and Sepultura. Hadez were among the first extreme metal bands in Peru and they shone as bright as any of the Cogumelo bands but it would take some time before the rest of the world awoke. Aquelarre feature some well written black/death metal with that South American touch. Its ruthless but its not just all about hyper speed. Here you find the filth, fury and aggression as you can expect but there are more variation in the songs that Hadez makes when they slow down the drums works with the guitar riffs instead of against them. There are also crawling doom passages and some chilling and screeching guitar work. Vocalist Edgar Noize (Edgardo Umeres Altamirano) growls like the best of them but he also has an impressive high pitched screaming voice at times. Definitely one of the highlights of this album. This really is a blasphemous and bestial black death album and anyone looking for the old school South American way of music should look no further. None of their later recordings could capture that magic vibe of this album. So look no further this is the one to own

Track list:
1. Human Extinction
2. A Cult To The Everlasting Badness
3. Intro
4. Form Designed To The Evil
5. Little Crown Abomination
6. A Sect At The End Of The Abyss
7. Intro / Dark Language Of A Supreme God
8. Drunk With The Saint’s Blood
9. The Oracle of the Bleeding Head
10. Aquelarre
11. Outro