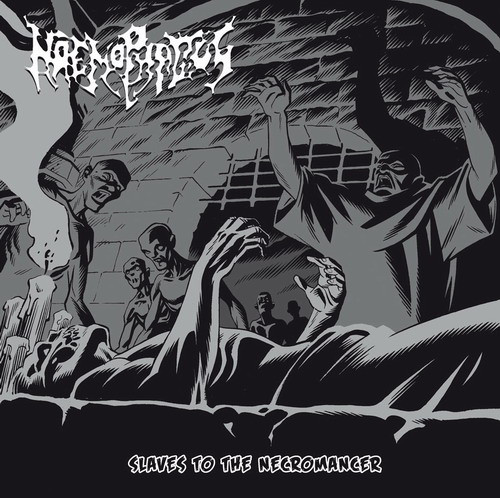 Haemophagus -Slaves To The Necromancer lp

Black vinyl with lyric insert and 3 bonus track not available on the cd version. Limited 400 copies

The Italian, Sicily to be exact, act Haemophagus is a 3-piece outfit that offers around 35 minutes of rather original Grind music, with a small restriction. If you think of Grindcore as being as fast as possible without any melodies this is not the case for Haemophagus. They have fast parts for sure, the wide spectrum of influences they have are also represented in their music. Songs as ‘Sunrise Over Fields Of Dust’ have a huge similarity to Autopsy at their “Mental Funeral” days (just check the drumbeat starting at 2:13). Same goes for ‘Dead Eater’ whereas ‘Consecration’ has fantastic vocal-lines close to Acheron’s ‘Thou Art Lord’ from their wonderful “Rites Of The Black Mass” album back in 1992. ‘Remember To Dismember’ is a homage to Repulsion par excellence and ‘Sniffing The Cremated Rests’ refreshes next to the fantastic title my old love for Napalm Death. ‘Red Diabolical Eyes’ is from the beginning with its shout “Rock And Roll” something for rockin’ Pungent Stench lovers. So what remains is a great album with 14 songs (including the intro ‘La Garrota’), along with several obligatory spoken sequences at the beginning of some songs which every fan of the mentioned bands can blindly buy. Other open-minded Death Metal and Grindcore fans should dare a listen as this is a release above the average.