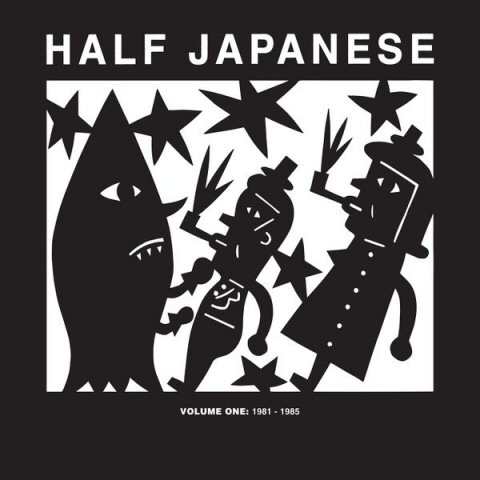 On their early recordings up to their epic-scale debut album 1/2 Gentlemen/Not Beasts, Half Japanese were a noisy and chaotic art punk act featuring the brothers Jad and David Fair. However when it was proven that there were folks willing to distribute their work to the public, Half Japanese’s vision became more expansive. In 1981, they expanded from a duo to a sextet, complete with drums, guitars, and saxophones, and remarkably enough, while the band sounded bigger and a bit more like a conventional rock group, the results were even noisier and more chaotic than before (and in many respects just as minimal). Volume One: 1981-1985 is a collection that brings together the first three albums from Half Japanese’s era as a bona fide rock band (or as close to one as they were willing to go), 1981’s Loud, 1984’s Our Solar System, and 1985’s Sing No Evil. The aesthetic thinking seems quite consistent throughout these three albums, and they cohere very well if you’re inclined to listen to them in a single, nearly two-hour sitting, though there are subtle but real differences between them. Loud is the craziest and most freewheeling set here, as the sax players and percussionists run roughshod over the bare frameworks of the melodies, while Our Solar System reveals a slightly tighter focus and an approach to the horns that suggests free jazz rather than proto-Stooges noisemaking. And Sing No Evil sounds tight and swaggering by this group’s yardstick, with the drumming a bit more precise and the brass players honking with soulful conviction as Jad Fair’s vocals reveal a new strength and confidence (and the funky percussion jam on the title cut was something they never could have accomplished just two years before). Of course, Jad has always been Half Japanese’s focal point and power source, and if his singing shapes up a bit with each album, his frenetic world-view remains the same as the overstimulated geek visionary grumbles about school, ponders the world around him, and obsesses frequently about women of all shapes, sizes, and outlooks. With 1987’s Music to Strip By, David Fair would leave Half Japanese and the group would pursue a more refined take on Jad’s music, so the three albums on Volume One document a very specific period of the group’s development; this is where Half Japanese first developed a signature sound and their unmistakable lyrical voice, and though they would make better records with time, this music is crucial in their history and development.