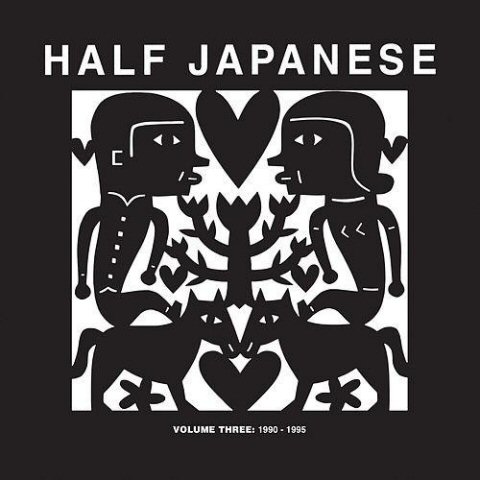 Some bands make records that exist in spaces of their own, every release a separate musical and philosophical statement. Half Japanese, on the other hand, often seem to be creating one big album that they’ve been delivering to the public in periodic episodes over the space of three decades, each chapter devoted to the obsessions of Jad Fair as he talks/sings over music created in bursts of passionate inspiration unfettered by the rigors of technique or melody. While the third installment in Fire Records’ impressive series of Half Japanese reissues features three albums in full from the band — 1990’s We Are They Who Ache with Amorous Love, 1993’s Fire in the Sky, and 1995’s Hot — between the stylistic push and pull taking place on all three records and the consistency of Fair’s eccentric vision, dominated by women, rock & roll, various unexplained phenomenon, and (at least on Fire in the Sky) UFOs, the songs all seem like random passages from the great book of The Quotations of Chairman Jad. Which isn’t to say there aren’t occasional changeups along the way, such as the lo-fi covers of “Gloria” and “Shanty Town” (as well as an unexpectedly remake of “All of Me”) on We Are They, the 12-minute Dylan-influenced stream-of-consciousness ramble titled “Always” on Fire in the Sky, and the straightforward punky tone of Hot. If Jad Fair’s surroundings change, Fair himself stays very much the same, and that’s a big part of his charm — he’s an endless font of inspiration, swaying between despair and joyous optimism, and always determined to do battle with a world that cannot bring him down. Most of Half Japanese’s albums are well worth your time, and Fire’s efforts to bring them together under one roof are tremendously admirable; Volume 2: 1987-1989 may be a better starter for beginners, but Volume 3: 1990-1995 runs a close second, and the friendly chaos of this music is still bracing decades after it was first recorded.