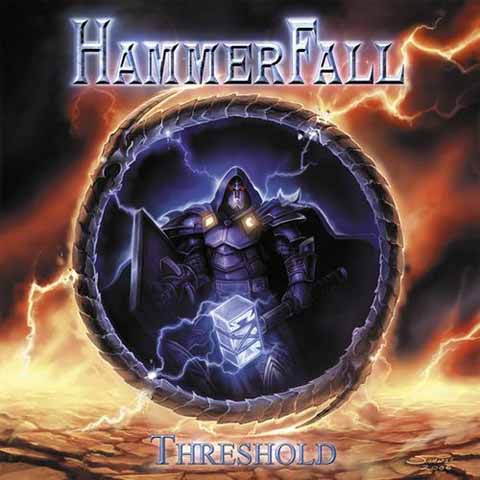 Following the unnaturally extended layoff enforced by guitarist Oscar Dronjak’s motorcycle accident in 2003, Swedish heavy metal traditionalists Hammerfall waited barely a year between their eventual return with fifth album, Chapter V in 2005, and the release of LP number six, Threshold, in 2006. This suddenly rushed release schedule — though likely resulting from nothing more than a backlog of pre-written material, ready to come out — takes something of an uncertain turn on Threshold’s first few numbers, which comprise a decent but terribly predictable title track; a lackluster autopilot job and a repetitive chorus in “The Fire Burns Forever”; and a lead-footed crawl through “Rebel Inside,” which not even Accept-like choral battalions can jolt into life. Indeed, the claim may be redundant when relating to a band whose very talents involve being true to metal’s classic sound, but all three simply sound too safe and formulaic. Luckily, salvation comes not a moment too soon when fourth cut, “Natural High,” arrives with an energetic burst and surprisingly atypical lyrics to inject a much needed dose of excitement, which is subsequently reprised by additional standouts like “Howlin’ with the ‘Pac,” “Shadow Empire” (boasting the album’s best riff), and “Genocide,” with its dramatic introductory stops and starts. In fact, with the exception of another, check-your-watch drag-fest called “Carved in Stone,” most every remaining track has something memorable to recommend it. “Dark Wings, Dark Words” is the record’s ambitious and evocative semi-ballad, “Reign of the Hammer” is a brisk, hardly groundbreaking, but nevertheless welcome instrumental, and the anthemic “Titan” provides a grand finale worthy of the Swedes’ majestic habits. In other words, though it lacks the overall consistency of certain previous efforts, Threshold still produces a fair amount of quality goods to appease most Hammerfall fans — or else it wouldn’t have entered the Swedish charts at number one.