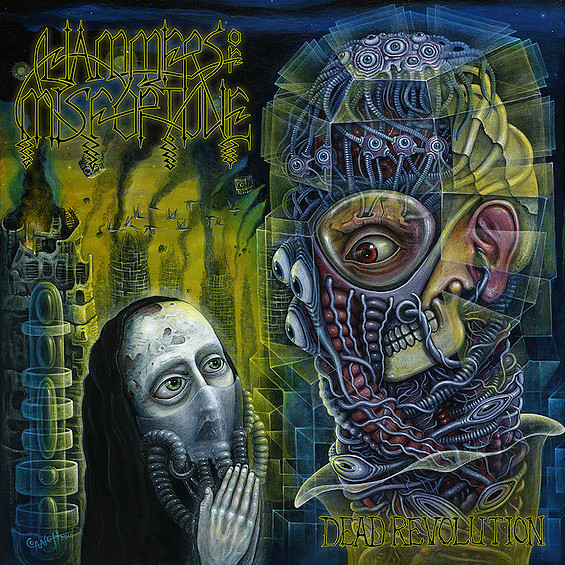 When West Coast progressive heavy metallers Hammers Of Misfortune are asked what took so long to follow-up 2011’s acclaimed 17th Street, principal songwriter and guitarist John Cobbett is likely to throw out a Lennon lyric, “Life is what happens to you while you’re busy making other plans.” Though he’s had Hammers of Misfortune on the brain for a good five years, life is exactly what’s halted Cobbett and company from marching forward on what would turn into the group’s sixth full-length, Dead Revolution. One, Cobbett and keyboardist Sigrid Sheie welcomed a baby. Two, frontman Joe Hutton was sidelined after being involved in a severe motorcycle accident. And three, while Hammers of Misfortune were away, Cobbett and Sheie blazed a crusty northern sky in Vhöl, guitarist Leila Abdul-Rauf had her coffin full with death metallers Vastum, bassist Paul Walker extolled doom metal’s virtues in The Worship of Silence, and drummer Will Carroll – who replaces Chewy Marzolo – was sticks up with legendary Bay Area thrashers Death Angel. Indeed, Lennon was right. As for differences between Dead Revolution and its predecessor 17th Street, Cobbett says it’s more varied, using different tones. The mainman also thinks it’s a darker and heavier effort. If trends and opinions are anything to go by, it would appear Hammers of Misfortune are sliding slowly into, well, darker and heavier territory. 17th Street, by comparison, was fiercer than Fields / Church of Broken Glass. Likewise, Dead Revolution eats its forebear 17th Street for proverbial breakfast. To wit, there’s no power ballad (“Summer Tears”) on the album. Then again, with tracks like the awesome “Sea of Heroes”, the stupendous “The Precipice”, the raging “Flying Alone”, and the title track’s riff-organ fest, fans expecting a continuation or expansion of “Summer Tears” will be placated by a more musically active Hammers of Misfortune. That’s not to say Dead Revolution is without its slow-burners. “Here Comes the Sky” pivots off a Pink Floyd axis (think “A Pillow in the Wind”) – with its soft strums, careful vocal interplay, and delicate percussion – before jettisoning into traditional heavy metal motifs. Dead Revolution’s no musical slouch, that’s for sure. “Of course, every song stands out to me,” says Cobbett. “I’ve no idea how listeners will react to them. ‘The Velvet Inquisition’ is probably one of the most ambitious compositions we’ve ever recorded. I was trying some different writing methods and the results are…interesting. ‘Days of ’49’ is an attempt to repurpose an old traditional folk song, which is new for us.” If there’s anything Cobbett is coy about, it’s the lyrics to Dead Revolution. As with 17th Street – an album about “loss and endings” – so too Hammers of Misfortune’s latest, lyrically it’s very personal. “As usual, I’m reluctant to talk about it,” says the six-stringer. “It has a lot to do with what’s been going on around me where I live, which just so happens to be going on seemingly everywhere. I live in San Francisco’s Mission District, and have for over two decades. A little research into what’s been going on here would explain a lot to the curious.”