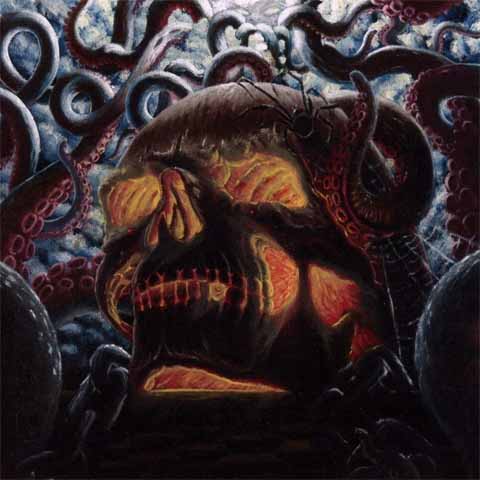 A split album between Sweden’s Hands Of Orlac and Finland’s The Wandering Midget. Orlac is the slower, weirder, more psychedelic slice of doom on offer. The band is enigmatically fronted by ‘The Sorceress,’ who recalls to me the sultry, earthen tones of Sophie Day (Alunah). Her flute adorns selected passages while the tripped-out vibe sought is evident in such moments as the mid-song solo on “From Below the Stars.” A decidedly 60s and 70s feel drapes over the riffs which is certainly tone-appropriate. By contrast, Midget draws more influence from classic metal from the 80s and the epic flavors favored by the likes of Atlantean Kodex. The lengthy grandiosity of “Where We March the Vultures Follow” is the split’s best track as it boasts a few soaring harmonies and groovy riffs, best demonstrating this sound. The structure of the release largely focuses on the mammoth bookending tracks, spanning over 13 and 18 minutes respectively, with the opener (“Curse of the Human Skull”) undertaken by Orlac and the closer (“Where We March the Vultures Follow”) by Midget. Dividing these are 2 interludes and a shorter middle track, all courtesy of Orlac. Perhaps it’s my constrictive tidiness but I appreciate this near-perfect symmetry on a split release. It’s also apparent why such a pairing was initiated as despite their differences, both bands most heavily feature mid-paced doom.