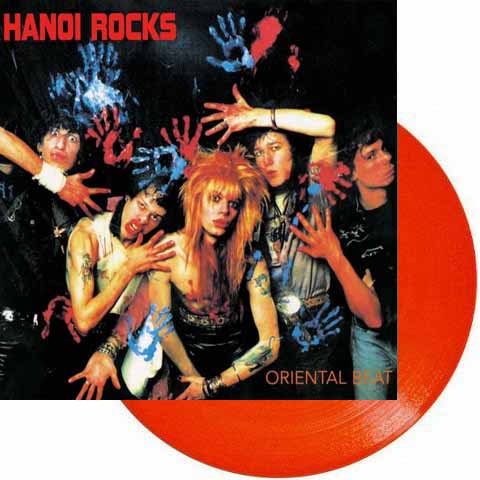 Hanoi Rocks may have been the best hard rock band Finland had to offer the world in 1982, but their sound and look was heavily influenced by the punk scenes of the late ’70s in downtown New York and England. Oriental Beat finds Hanoi Rocks bringing the glam sound and look of the New York Dolls into the ’80s. Oriental Beat is an album that finds itself slightly out of step with the music scene of the period — it was too late for the prime punk period of the late ’70s and it was too early for the pop-metal explosion of the mid-to-late ’80s. Oriental Beat is full of big singalong choruses and catchy riffs that would have made the band heavy players either five years earlier or later. The band shows its punk and glam influences not only with its look on the cover of the album but also with the music performed on the album as well. Tracks like “M.C. Baby” and “Oriental Beat” find the band closely resembling English punk rockers the Damned. Guitarist and chief songwriter Andy McCoy does his best Johnny Thunders on “Teenangels Outsiders.” Other tracks on the album show the band displaying a sound that would be emulated by many future pop-metal bands. “Motorvatin'” and “Devil Woman” would easily have found a home on MTV circa 1987, and feminine-looking, lipstick-wearing, glammed-out lead singer Michael Monroe’s image would have been plastered all over music television right next to Bret Michaels, Vince Neil, and Jon Bon Jovi. Despite a respectable amount of potential on most of the album, poor production limits the effectiveness of many tracks. The drums sound like they were recorded in another building separate from the rest of the band. A slick ’80s hit-making producer like Mutt Lange (Def Leppard) or Bob Rock (Mötley Crüe, the Cult) could have made this band huge in the States. Oriental Beat shows where punk would have gone in the ’80s if new wave and synthesizers never came along. By listening to this album you can see the influence Hanoi Rocks had on the artists that followed them. In 1984, the band’s drummer, Razzle, died in a car accident as a passenger in a car driven by Mötley Crüe’s Vince Neil; the band broke up a year later. Due to this tragic turn of events Oriental Beat has to unfortunately stand as an album by a band full of potential that sadly was never given a chance to fulfill it.