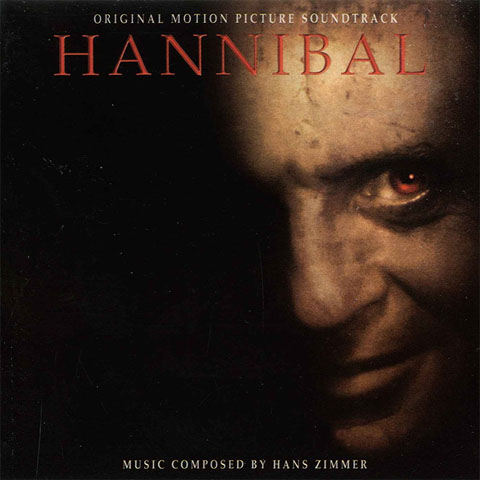 Hannibal, director Ridley Scott’s follow-up to Jonathan Demme’s The Silence of the Lambs, is a very different work from its predecessor. A mystery/thriller, The Silence of the Lambs focused on the tense exchanges between a highly intelligent serial killer and a novice FBI agent in an American prison, and Howard Shore’s score echoed the film’s claustrophobic, subterranean settings. In Hannibal, the killer, Dr. Hannibal “the Cannibal” Lecter, is at large, living in Florence, though he eventually returns to the U.S. for his confrontation with his old nemesis. Appropriately, Hans Zimmer has created a score steeped in classical influences, particularly Italian opera. Using fast-tempo percussion and haunting sweeps of strings, plus a boys choir, he underscores the film’s suspenseful moments, but only in a few passages, notably during “Let My Home Be My Gallows,” which accompanies Lecter’s encounter with an Italian police inspector, does the soundtrack include portions of the film’s moments of outright horror. Zimmer’s work is augmented by other classical and pseudo-classical pieces: Glenn Gould’s “Aria da Capo” from Bach’s Goldberg Variations; Klaus Badelt’s “Gourmet Valse Tartare,” a waltz reminiscent of Johann Strauss’ “The Blue Danube”; “Firenze Di Notte” by Martin Tillman and Mel Wesson; and Patrick Cassidy’s “Vide Cor Meum,” a piece of opera pastiche featuring Danielle De Niese and Bruno Lazzaretti and set to a text by Dante. Anthony Hopkins, who plays Lecter, is featured speaking excerpts from his literary lectures as a library curator and reciting a letter to the FBI agent filled with his character’s black humor. With its emphasis on the film’s classical pretensions, the soundtrack gives only a mild sense of the violent aspects of the movie, though Zimmer’s “For a Small Stipend,” with its mixture of synthesized and orchestral music with sound effects, carries some of that tone. Still, listening to the album is a far less disturbing experience than watching the film.