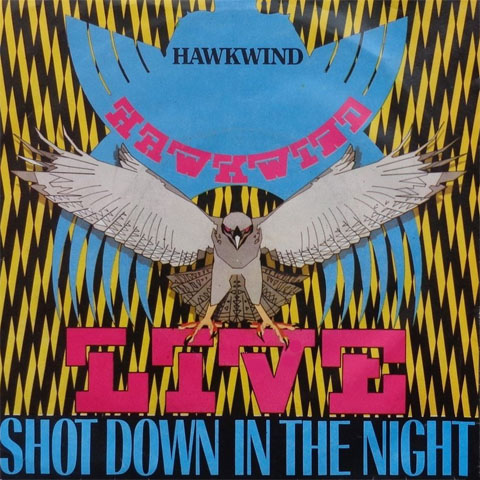 Hawkwind ‎–Live Shot Down In The Night 7″

Reduced price due to cover being cut out and vg

Shot Down In The Night was witten by Steve Swindells, who was at that time keyboardist with Hawkwind. The song was written while rehearsing with Hawkwind (then working under the name Hawklords) at Rockfield Studios in 1979. He presented it to the band, and they agreed on its potential as a future single. However, Swindells was then offered a solo record deal by ATCO, and left Hawkwind to pursue a solo career. Swindells and Hawkwind released different versions of the song as a single on 27 June 1980. Swindells claims that his version was “waaay harder, more dramatic and simply better than Hawkwind’s version. In both the battle of the butch and the artistic, the queer won.” Despite that claim, Simon King (drums) and Huw Lloyd-Langton (guitars) played on both recordings, giving the two versions a musical closeness, although Swindells’ gruff vocals perhaps make his version heavier than Dave Brock’s folky vocal on Hawkwind’s version. Hawkwind’s version reached #59 in the UK singles chart, being a slightly different version to the one on the album Live Seventy Nine.

Track list:
1. Shot Down In The Night
2. Urban Guerilla