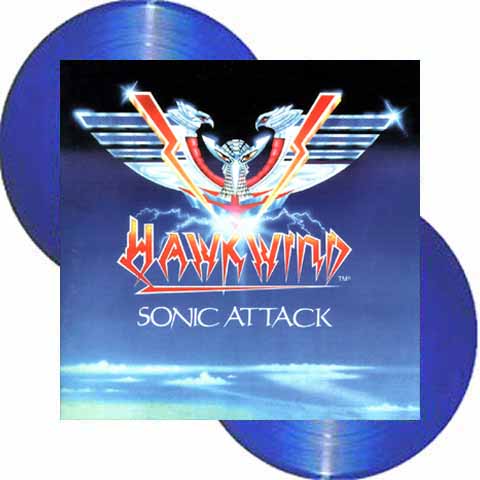 By the time of Sonic Attack, Hawkwind, after losing virtually all of its original members save singer-guitarist Dave Brock, had made a complete transition from a psychedelic proto-punk outfit to a sleek, polished heavy metal band. Sonic Attack sounds like it could have been recorded by early-’80s contemporaries like Iron Maiden and Judas Priest. True, neither of those bands would have written a song like “Psychosonia,” in which the lyrics “They are trying to rob us of our right to communicate” are turned into a cheerleading spell-a-thon. Nonetheless, that (and the title track, which originally appeared on 1973’s Space Ritual) are the only concessions to the original, quirky Hawkwind style. Most of the lyrics are typical sci-fi and Dungeons & Dragons-style tales, which are not all that dissimilar from lyrics of other bands of the era, but not particularly notable either. The musicianship is clean, probably even more so than on Hawkwind’s earlier, more classic albums. What results, however, is intricate hard rock that is only intermittently riveting. Sonic Attack has some impressive moments, but never really gels as a whole.